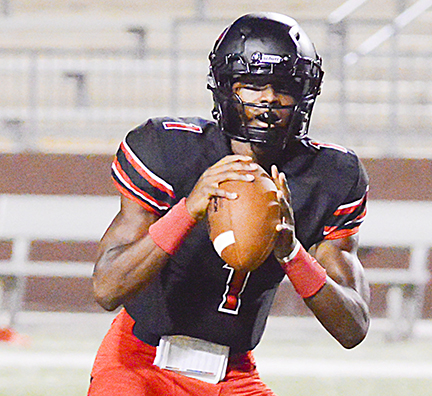 Port Arthur Memorial senior Kadon Harrison is off to a hot start in 2016. (Gabriel Pruett/The News)

Harrison playing at a high level in 2016

The days of Port Arthur Memorial senior quarterback Kadon Harrison being nervous about anything on a football field are over.

Those days were the past two seasons as the Titans played in District 21-6A and were facing teams like George Ranch, North Shore and Channelview.

Harrison knows District 22-5A has some very talented teams like Nederland and Port Neches-Groves. He respects those teams.

Harrison is simply more prepared and more groomed for the job this season.

“I have been on varsity since my freshman year so it is crazy it is already my senior year,” Harrison said. “There have been a lot of ups and downs in this program. It is good to see we are headed somewhere positive. The two 3-7 years were tough but this year I feel good about it.”

Memorial is officially 2-0 this year after posting back-to-back 3-7 seasons. The Titans could have been 3-0 at this point but the game against Houston Westside was cancelled due to lights at Memorial Stadium going off. The Titans were leading 34-27 at that point.

Harrison missed six games as a junior with a leg injury. He threw for 1,125 yards as a sophomore and this past summer he committed to the Louisiana-Lafayette.

“It was hard after losing to those teams like Channelview every week,” Harrison said. “There were times you ask, ‘How low can we get?’ Now we just have to bounce back and I believe we are going to prove to people this year we are going to be alright.”

To put the teams Memorial was facing into context a little, remember the fact former Channelview quarterback Jalen Hurts is now starting as a true freshman for No. 1 Alabama.

Harrison has shrugged off those years. He is currently third out of District 22-5A quarterbacks with 458 yards passing in only about a game and three quarters of action. He is 34-of-44 passing with two interceptions and five touchdowns.

“He is doing a lot better of managing the game this year,” Memorial coach and Kadon’s father Kenny Harrison said. “He is taking control of the offense and being the leader that we want him to be. It is very important that the game has finally slowed down for him. He played as a sophomore against North Shore, La Porte and some other Houston teams.

“That was a lot for him when he was 15 years old. Now that he is 17, the game has slowed down for him, and he is able to see some of the things we told him about as a sophomore.”

One thing that has not slowed down is the fact time is running out for the Harrison duo to spend together during football season.

“I try not to rush through the week anymore and just get to Friday nights,” Coach Harrison said. “I try to enjoy every practice. I am excited about Wednesdays, I will be excited about Thursday and then the games on Friday to spend time with my son playing football. It has been great being around him in this game.”
•
Gabriel Pruett: 721-2436. Twitter: @PaNewsGabe

NEDERLAND — The yardage Vidor racks up with a Slot-T offense in an age of Spread-dominated football is astounding. The... read more