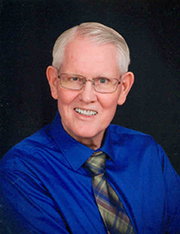 He was born on June 18, 1935 to Audrey Monget Klinkhammer and John A. Klinkhammer, III in Port Arthur, Texas. Herman was a lifelong resident of the area.

He graduated from Port Neches High School and was always proud to be a member of the 1954 State Championship Football team. Herman served in the U. S. Navy as a Seabee and retired after 22 years. He retired from Texaco Chemical (Neches Butane) as maintenance coordinator after 38 years. Herman was a member of St. Peter the Apostle Catholic Church in Groves, where he was active in Mens ACTS.

He was preceded in death by his parents, his brother, Gayle Page and his son, Mike Klinkhammer.

Visitation for family and friends will be on Tuesday, September 20, 2016 from 5:00 PM to 8:00 PM with a rosary to be prayed at 6:00 PM in the Thompson Memorial Chapel at Clayton Thompson Funeral Home in Groves. A Mass of Christian Burial to honor Herman’s life will be celebrated at 10:00 AM Wednesday, September 21, 2016 at St. Peter the Apostle Catholic Church in Groves. Burial with Full Military Honors will follow at Memory Gardens in Nederland.

The family is asking, in lieu of flowers that donations can be made to Alzheimer’s research, St. Jude Children’s Hospital or SETX Humane Society in memory of Herman.