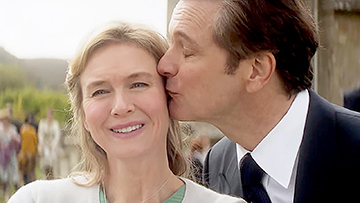 Mr. Darcy gets up close and personal with Bridget in the new ‘Bridget Jones’s Baby’ trailer.

THE MOVIE GUY: A charming rebirth for ‘Bridget Jones’

It’s been 12 years since we last saw Bridget Jones in a movie, so it’s a bit surprising to see Helen Fielding’s beloved literary character making a comeback in this weekend’s “Bridget Jones’s Baby.” It’s even more surprising to find that there is still pretty much charm left in this mostly-forgotten franchise, even if it does feel a bit like a throwback to earlier times.

Renée Zellweger returns in the title role as the lovably neurotic television producer who’s still trying to get a handle on her life. She’s no longer obsessed about her weight and has given up cigarettes, but she’s still got plenty of everyday vices, which she explores through charming voice over entries into her diary.

She also has one big new problem this time around. Following a night of passion with an old flame, Mark Darcy (Colin Firth) and another with an American tech millionaire (Patrick Dempsey), Bridget finds herself pregnant at age 43. She’s not quite sure which of her beaus is the father, and the movie strains to wring humor from this somewhat forced dilemma.

In a bit of a surprise, both men turn out to be thrilled at the prospect of fatherhood. They don’t abandon Bridget when they learn about the other man in her life, turning her prenatal support into a competition of sorts. This isn’t one of those movies where there is only one Mr. Right for Bridget to inevitably choose, but rather one where she has two potentially wonderful suitors, both of whom are willing to go to great lengths to win her heart.

Much of the film’s charm comes from the fact that these three central characters are so lovable that it’s easy to cheer for them, no matter how the story turns out. That also means that the film is somewhat lacking in the conflict that would truly rouse audience passions. The end result is a soft-and-fuzzy movie that doesn’t make a lasting impression, but certainly offers plenty of enjoyable moments to savor.

One other character adds greatly to this enjoyment. Emma Thompson plays a very funny obstetrician who is amused by Bridget’s suitors. Thompson, who also co-wrote the film, is a wonderful comedic actress and spices things up whenever she’s on screen. I almost wish that the movie had spent more time sitting in the doctor’s office.

The rest of the time finds Bridget doing her daffy heroine routine, shaking off one self-inflicted embarrassing moment after another. It’s amusing, but not exactly the stuff that makes great comedies. That’s okay because “Bridget Jones’s Baby” isn’t a great comedy by any means, but the characters are lovable enough that nostalgic audiences should enjoy reacquainting themselves with an old cinematic friend.

Movie reviews by Sean, “The Movie Guy,” are published bi-weekly in “The Port Arthur News” and seen weekly on KFDM and KBTV. Sean welcomes your comments via email atsmcbride@sbgtv.com.com.

The Annual Mexican Heritage Fiesta in Port Arthur has been a strong venue for live music and performances — and... read more