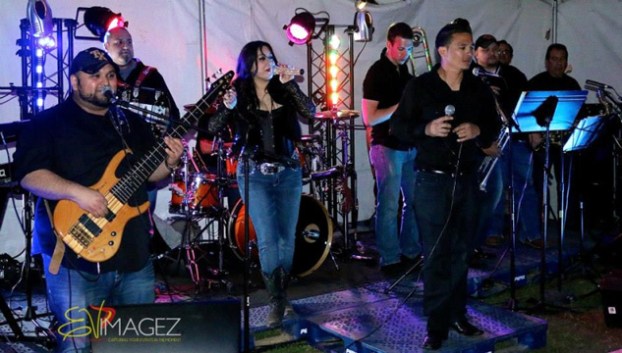 The Annual Mexican Heritage Fiesta in Port Arthur has been a strong venue for live music and performances — and the 48th one will be no different with bands like Sandy G y Los Gavilanes.

Attendees could expect to hear a fusion of Tejano and Cumbia music from the Houston-based band.

“We have a full brass section in our band,” Julio Guzman, bassist and manager, said. “It’s a five-piece brass section, which is like old-school Tejano, but we’re mostly younger guys so it has a modern twist to it.”

“It sounds very old-school, but it has a new vibe to it,” Guzman said.

The band draws from Tejano, Cumbias and other styles, as well as from such artists like Jay Perez and Selena. The latter is a particular favorite of the singer.

“We do a lot of Selena covers because obviously she’s one of the artists that Sandy is inspired by,” Guzman said.

“We started the project with Sandy G for a more Tejano feel back in 2013,” Guzman said. “Our very first gig with Sandy was this huge event in Humble with about 7,000 people; and right after that, we did the Houston Rodeo.”

Apparently, the crowd reaction from both events was very favorable.

“People started responding positively and following Sandy,” Guzman recalled. “She’s got this nice voice, this really strong voice that people like. [After that], we got really busy.”

Guzman was able to book “high profile gigs” for the band, including the one at the 48th Annual Mexican Heritage Festival.

“We actually got approached by Mr. [Roberto] Moreno and his wife,” Guzman said. “We were performing at the Jefferson Theatre in Beaumont and they were also performing after us.

“He liked our performance there and said we’d be great for the Fiesta.”

Sandy sings, Guzman plays bass and the nearly dozen other Gavilanes play their respective instruments. Yet, what does Gavilanes mean?

“The actual meaning is ‘chicken hawk,’” Guzman said. “But in Spanish, the meaning is different.

“It means something like ‘Caballero,’ which is ‘gentleman’ in Spanish. Plus, [Gavilanes] has a plural meaning for the group and we’re all guys.”

Sandy G y Los Gavilanes have been performing together for three years — and during that time, their hard work has been clear to Guzman.

“We put a lot of work into the band to make sure we sound professional and look professional… then we get good responses [from the crowd],” Guzman said.

“It’s awesome. It makes you feel that they know what you’re trying to do.”

Port Arthur native returns to give back to kids

As students got ready for another week of learning and instruction at Booker T. Washington Elementary School in Port Arthur,... read more