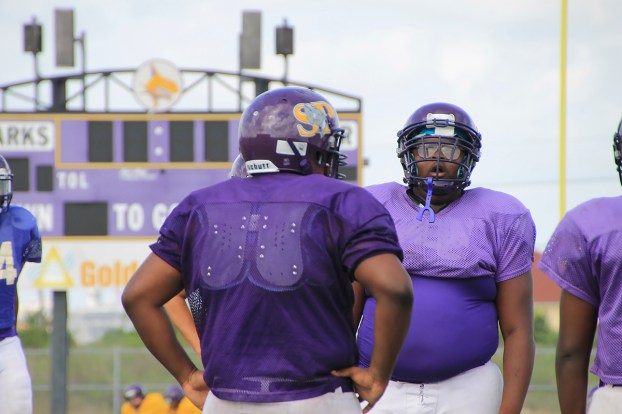 Victory that matters: Sharks overcome with joy after ending slide

SABINE PASS — The feeling among Sabine Pass’ football players wasn’t like anything they had experienced in their previous 18 games.

“It was very emotional,” Jason Thibodeaux said, now two games into his second stint as the Sharks’ head coach. “There were a lot of tears from players who’ve suffered repeatedly from defeats.”

Down 14-6 at halftime to Galveston O’Connell at home last Friday, No. 19 stared right in front of the Sharks’ faces. But they had enough of losing.

“We just talked about playmaking, talking about what we saw on offense and defense,” senior fullback/linebacker Brayden Miller said, asked whether there was a halftime speech.

Nothing big, just a few adjustments being made.

Then the teammates got one another pumped up, senior running back/defensive back D’Coven Turner said.

Right out of the gate, Sabine Pass scored 10 unanswered points and held on the rest of the way to beat the Buccaneers 16-14, bringing a kind of joy to a community that suffered nearly two years of not winning a game. The Sharks hadn’t won since beating Houston Lutheran North 23-6 on Sept. 12, 2014, at home.

“I can’t describe the feeling because it had been so long since we won,” Thibodeaux said. “I told the guys after the game, don’t ever lose that feeling.

“And then Monday, we had to lose that feeling because have another game to practice for.”

It was Thibodeaux’s biggest reward to date for stepping back up as head coach following Trey Harvey’s departure for an assistant principal’s role at Bridge City. Thibodeaux had led the Sharks from the program’s relaunch in 2006 through the 2010 season and had served only as an assistant afterward to spend more time with family.

The Sharks faithful were rewarded, too. They got see a win at home after O’Connell failed to secure a home field as originally scheduled.

Miller and Turner played big roles in the long awaited win. Miller got the Sharks on the board with a 12-yard touchdown reception, but it was Turner’s 57-yard punt return early in the third quarter, followed by a two-point conversion score by quarterback Dominique Wilson, that tied the game at 14. The Sharks went ahead the next possession on a safety when O’Connnell’s quarterback fumbled an exchange and recovered it in his own end zone.

Turner returned a punt 37 yards for Sabine Pass’ only score against First Baptist.

“The 12-6 game put a little confidence in them,” Thibodeaux said. “If they could be within a touchdown instead of two to three scores, they could put it together and win a game.”

With only 23 players on the roster and each one playing on offense and defense, the Sharks managed to hold the Bucs scoreless the rest of the way. The visitors were driving inside the Sabine Pass 10 with about 1:10 remaining in the game when senior lineman Leonard Ifield recovered a fumble, sealing the win.

“They had a pretty good kicker, too, with the wind to his back,” Thibodeaux said.

Thibodeaux credited the win in part to a much different mindset of the players from years’ past.

“And belief in God,” Turner said. “We were used to losing. We just wanted to gain some motivation.”

They had gotten some after the narrow defeat to First Baptist, the closest they came to victory during the skid. The Sharks’ average margin of defeat in the 17 games prior was 41.1 points, and only twice since the 2014 win had they come within a single digit of ending the slide. They did not score in six straight games since the win, but showed some progress the following year by scoring in seven games.

Since beating O’Connell, two more players have joined the team. Sabine Pass started preseason camp with only 14, as some had not finished their summer vacations.

Numerically the victory has made a big difference, according to Miller.

“In practices and games, you get some relief and some backups,” he said. “You don’t catch nearly as many cramps as in camp.”

“It couldn’t happen in a better scenario,” Thibodeaux said. “Just the relief of winning the game and the emotion of the players makes all the hours of coaching worthwhile.”

**CORRECTED to reflect actual scoring rally** BEAUMONT — Lamar isn’t quite ready for the big time, but the Cardinals will... read more