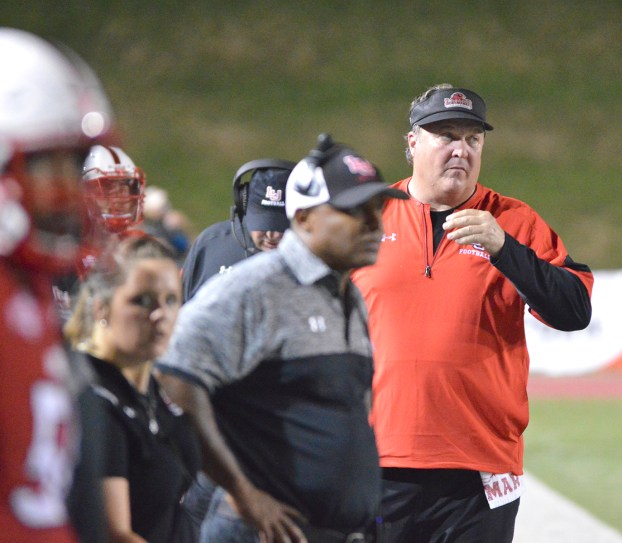 BEAUMONT — The final score could have been Coastal Carolina 31, Lamar 14. Coastal, which had already scored 28 unanswered points, reached the Lamar 5 for a first down with about a minute to go. Three plays later, De’Angelo Henderson drove from the 2 to fashion the final score at 38-14 with the extra point.

If the final moments of a season-opening defeat didn’t sit well with seventh-year Cardinals head coach Ray Woodard, he didn’t show any disgust in addressing it, in either his postgame interview Saturday night or his weekly news conference Monday.

“I’ve been a head coach a number of years now,” he said. “I’ve been on both sides of it. Late in a game, when you’ve got a game won, and you’ve got the ball, that’s your decision and you make it. You tell your OC [offensive coordinator], let’s stick it to them one more time, and you get into that spill of ‘We’re there to score every time,’ and ‘We’re going to play 60 minutes’ and yakety yak-yak-yak.

Coastal coach Joe Moglia told The Sun News of Myrtle Beach, S.C., he wanted the Chanticleers — who actually slipped one notch to 17th in the STATS FCS Poll released Monday — to gain “a little bit more confidence” by scoring toward the end. Otherwise, the Chants had “always” taken a knee in such situations.

“But again we were down 14-11 and we’ve got a lot of inexperience playing for us now,” Moglia said, his team actually down 14-3 at halftime. “I wanted our guys to feel they can score if they need to score in those type of situations. That is mostly the reason for that.”

“So, the game was 31-14 before they scored, right?” Woodard said. “If they don’t score, they don’t have any confidence going into next week? They needed that score to have confidence? If we had stopped them, would we have more confidence? Like I said, you’ve got to be prepared to give that sort of spill if you’re going to be the type of guy who does that.”

Woodard reiterated his disappointment to his players Sunday in the Cardinals’ second-half performance, when they blew a 14-3 halftime lead and allowed the Chants to score 35 unanswered points.

The rally began with Richie Sampson’s 71-yard return of an interception thrown by Carson Earp.

“It was a little bit of everything,” Woodard said. “First, it starts with coaching, with me. We didn’t do a good-enough job coaching and we didn’t do a good enough job playing. I kind of picked it up after the interception. It was still 14-11. From that point on, we didn’t convert a third down offensively. We didn’t give ourselves a chance. We left our defense on the field way too much, and it seemed like Coastal stayed on our end the entire second half.”

Coastal Carolina scored on six of its eight second-half possessions, including four touchdowns and two field goals. Lamar punted four times, Earp threw two interceptions and the Cards turned the ball over once on downs.

Momentum swung in the Chants’ direction from the pick-six. Earp said he made a bad throw once the play broke down and he saw an open receiver on the run.

“Momentum is a powerful thing,” Earp said. “We weren’t really able to fight back after that. I think that was a big swing in the game.”

The loss wasn’t a reflection of the Cardinals’ effort, as Woodard maintained from his postgame comments Saturday night.

“I think we have an opportunity to go on and be a very good football team,” Woodard said. “The second week is always important after the first game. This is the week you need to see a lot of improvement. You try your best to do everything you can to get a team ready to play, but you learn more playing a game than you do any other way. There will be a lot of things we need to correct. You find out a little more about players. There’ll be a change or two in that area in personnel, but we need to see a big jump.”

Woodard announced Monday that junior starting center Matthew Oubre will undergo an MRI on a knee he injured during the CCU games. The coach did not describe how the injury occurred and didn’t have an idea if Oubre, who did not miss a start in 2015, would miss a significant amount of time, but he said he likely will miss Saturday’s game at the University of Houston.

Woodard said senior right guard Bret Treadway may possibly return to the lineup at Houston after missing the Coastal game with mononucleosis. It was Treadway’s first missed game of his career, ending a string of 35 starts.

“I’m sure it hurt somewhat,” Earp said of not having preseason All-American Treadway, “but I thought the guys that played [Saturday] did a good job. I had time to throw. I thought they played really hard.”

The American Athletic Conference named Houston quarterback Greg Ward and cornerback Brandon Wilson as two of its players of the week Monday.

Ward won the offensive player of the week honors after throwing for 321 yards and two touchdowns on 23-of-40 passing in the 15th-ranked Cougars’ 33-23 win over No. 3 Oklahoma at NRG Stadium. Wilson, who was also named the Walter Camp National Defensive Player of the Week on Sunday, returned a missed field goal 100 yards for a TD (actually from the back of the end zone) and finished with 10 tackles.

It was the sixth different way Wilson scored a TD. He’s scored two by rushing, two on kickoff returns, one on a fumble return, another on an interception return and the other on a blocked field goal return.

American Sports Network has picked up Saturday’s game at TDECU Stadium for an over-the-air broadcast. The network is already producing the game for webcast on ESPN3.com.

ASN listed KBTV-4.2 (Bounce network, available over the air) as the local channel for the game.

Brett Dolan and former Houston Texans defensive lineman N.D. Kalu will announce the game on ASN. The game also can be heard in the Houston area on KPRC-AM 950, as well as the Cardinals’ flagship station, KLVI-AM 560 in Jefferson County.

**CORRECTED to reflect actual scoring rally** BEAUMONT — Lamar isn’t quite ready for the big time, but the Cardinals will... read more