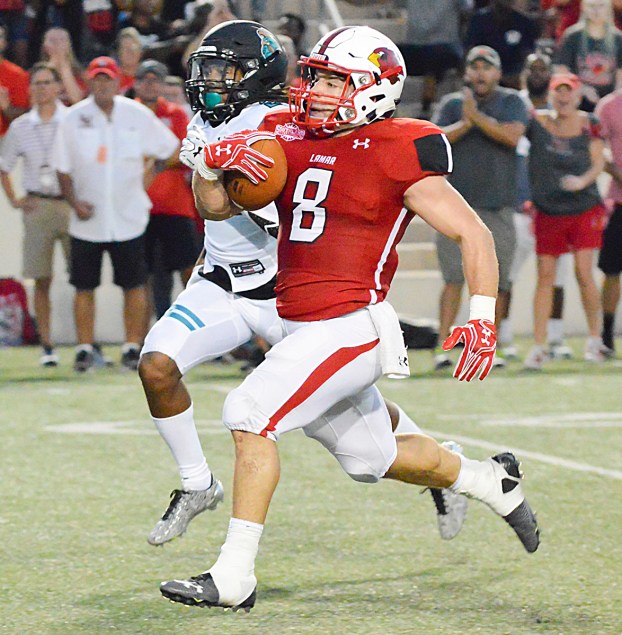 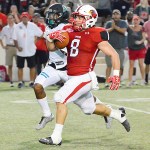 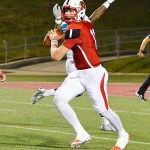 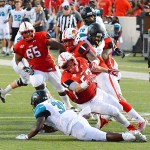 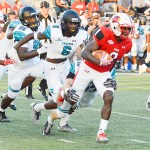 BEAUMONT — Lamar isn’t quite ready for the big time, but the Cardinals will play a big-time team in a week.

Whatever promise the Cardinals showed after holding a 14-3 halftime lead was completely shot the rest of the way, as FCS 16th-ranked Coastal Carolina scored 35 unanswered points and took a 38-14 win before a crowd of 8,697 at Provost Umphrey Stadium.

Lamar senior Kade Harrington got his candidacy for a second straight All-American season off to a fast start, turning in touchdown runs of 64 and 59 yards. He went for 207 yards on 28 carries, bettering his average of 190.2 yards an outing in 2015.

The Cardinals are searching for answers instead of going into a big-money game with FBS 15th-ranked Houston with some momentum. Houston rocked college football Saturday with a 33-23 win of No. 3 Oklahoma in NRG Stadium.

Harrington said the Cardinals have to continue to play their game next Saturday on the road.

Coastal Carolina, which is transitioning into the FBS for 2017 and fielding 85 scholarships, seemed to wear down Lamar in the second half. The Cardinals mustered 151 yards in the second half after going for 240 before halftime.

Meanwhile, the Chanticleers went for 251 total yards after being held to 156 before halftime.

Coastal’s 28-point turnaround started on Carson Earp’s errant throw on the run right into the hands of Richie Sampson. His 71-yard return for a TD was the second-longest in Coastal’s 14-year program history.

Lamar was then held to 4 yards on its next series, and, following a 31-yard punt return by Jones, Oshamar Abercrombie rushed 26 yards to give the Chanticleers the lead at 18-14. It was 21-14 after Ryan Granger converted his second of three field goals of the night.

Coastal Carolina had an All-America running back of its own in De’Angelo Henderson, a 5-foot-8, 208-pound senior. He ground out 158 yards on 28 carries and rushed for touchdowns of 9 and 2 yards in the second half.

In the process, he set an all-Division I record for most consecutive games with a TD with 27.

But his final TD, in which he dove into the end zone with 9 seconds remaining in a game out of reach, apparently was a point of contention.

Senior Carson Earp completed 13 of 27 passes for 154 yards and two picks, but that first INT set the stage for a long second half.

Sophomore Josh Stilley, in his first collegiate start, went 10 for 22 for 138 yards for the Chants.

Harrington and Henderson were just two All-Americans lining up in Saturday’s game.

Lamar senior right guard Bret Treadway missed a start for the first time in his career as he continues to battle mononucleosis. Treadway had started in 35 straight games.

Cisco College junior transfer Marcus Daggs led the Cards in receiving with 47 yards on four catches. Sophomore DeWan Thompson, who was at Washington State last season, made one diving catch for 30 yards.

Lamar senior Alex Ball missed his only attempt of 2016 from 33 yards out late in the first quarter. It was his third straight missed try, dating back to a 0-for-2 homecoming game against Nicholls State last November. Ball was 10 for 13 to finish 2015.

The Cardinals will take on Houston at 11 a.m. next Saturday in TDECU Stadium, Houston’s on-campus stadium. The game will be webcast on ESPN3.com.

Take away the penalty flags and a few incomplete passes, and Port Arthur Memorial more than likely would have played... read more