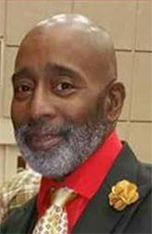 I have fought a good fight, I have finished the race, I have kept the faith.

Paul was a devoted husband and man of strong faith. He was a member of Rock Island Missionary Baptist Church, where he served as Vice Chairman of the Deacons and was a member of the Male Chorus.

Paul was a 1976 graduate of Abraham Lincoln High School. He was employed by Valero until the time of his illness. He was a member of the Royalist Social & Civic Club.

He is preceded in death by his parents, Clifford Collins, Sr. and Louise Francis.

Funeral service will be 2 p.m. Saturday, September 3, 2016 at Rock Island Missionary Baptist Church with visitation from 12 noon until service time. Reverend Ransom E. Howard will officiate. Entombment will follow in Greenlawn Memorial Park under the direction of Gabriel Funeral Home.