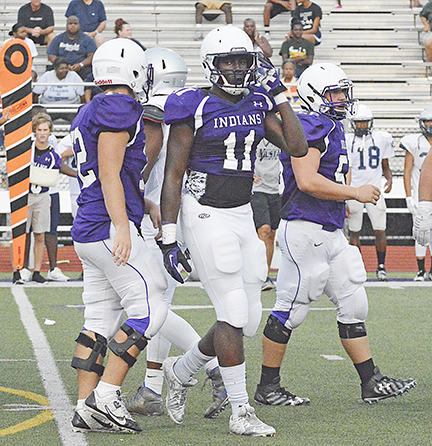 The perception by some is McZeal, a senior receiver for the Port Neches-Groves Indians, cannot catch the football.

Coach Brandon Faircloth has seen the same tweets and is not concerned a single bit.

“I have told Keynel that lions do not worry about the opinion of sheep,” Faircloth said. “Keynel is our lion. Want to know how much confidence I have in Keynel? Watch how many times we throw to the guy this year.

There have been times McZeal has dropped the football. It is not something that hinders McZeal’s confidence.

“I forget it the moment the play is over,” McZeal said.

McZeal is a monster on the football field and so much so he is committed to play college football in the SEC with the Texas A&M Aggies. He is the fourth player in two years out of PNG to accept a Division I football scholarship and third receiver to do so behind Lamar freshman Caisen Sullivan and UTSA freshman Jack Giblin.

“He is a freak of nature,” Faircloth said. “We are not all created equal. Keynel, God blessed him with size and speed. He has God-given abilities because he is really talented.”

McZeal missed a majority of his junior campaign due to a wrist injury. He pulled down 18 receptions for 233 yards and two touchdowns. He wants more from himself this year and knows if he is at his best, the Indians can win a lot of games.

“Now that senior year is here, it feels like just yesterday I was a freshman,” McZeal said.
The fact it is his senior year means McZeal wants to accomplish a few goals.

McZeal is of course talking about PNG trying to end a six-game losing skid to the Bulldogs. That game comes on Nov. 4 in the Bum Phillips Bowl.

First, McZeal and the Indians face Silsbee Friday at 7 p.m. at The Reservation to start the regular season.

Sophomore quarterback Roshon Johnson will guide the Indians this year. McZeal likes what he sees out of his new quarterback who is trying to replace Adam Morse.

“Adam was a great quarterback,” McZeal said. “Adam could put the ball exactly where he wanted and he was a great leader.

“Now that we have Roschon, he is a younger guy. He is a dual-threat guy who can run and throw the ball. He also can put the ball exactly where he needs to. It feels good having another great quarterback to play with.”

Faircloth first saw McZeal when he was in middle school. He played quarterback and was great at that position before moving over to receiver.

“He was already a lot bigger than I was,” Faircloth said. “He was probably 6-2 in sixth grade.”

McZeal has added a wrinkle to his game this year as opposing offenses can now expect to see him lined up at defensive end on some plays.

“I always played defense but stopped my freshman year,” McZeal said. “I begged coach to play it last year but couldn’t because of my wrist. So, this year again I asked him to play defense. I like being on the defense line. I am looking for some sacks.”

So, who is this Bay?

The high school of about 1,300 students on the north Florida coast aptly named Bay is known as the Tornadoes.... read more