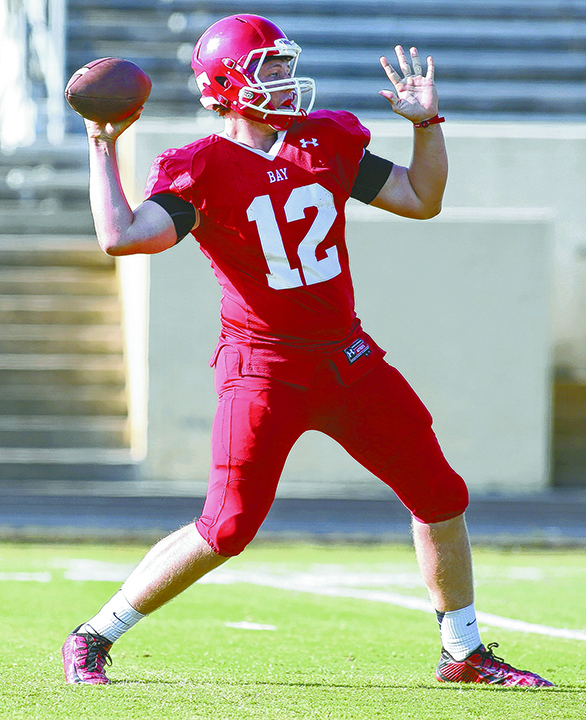 So, who is this Bay?

The high school of about 1,300 students on the north Florida coast aptly named Bay is known as the Tornadoes.

For its new head football coach, the past five months have been a whirlwind.

“You don’t have a place to stay and worry about all the wrong things,” Mike Watkins said. “Bay lost their coach [in February] and they went a long time without their coach. Especially for a junior becoming a senior, that’s not awesome.”

The Panama City-based Tornadoes, who went 8-3 last season, missed plenty of offseason work in February and March. Watkins was tasked in a short amount of time to install a new way for the team to practice and a new tempo.

As August draws to a close, Bay has acclimated to Watkins’ system.

Adding to the whirlwind of things, Watkins has had to replace nine to 10 starters on both sides of the ball, including the quarterback. Those guys helped Bay beat Vidor 19-7 in Texas last season.

Among the losses are a 4,000-yard career rusher in Raekwon Webb, who’s now at New Mexico Military Institute, and two-year secondary starter Keyshawn Woodfaulk, who moved to a school in Princeton, located just northeast of Dallas. A defensive lineman, Janarius Robinson, was a four-star recruit to Florida State.

“What I saw in him was an ability to throw the ball,” Watkins said. “The ball really jumps out of his hand. His issue is that he’s never played the position.”

The 6-foot-2, 215-pound Clement made his QB debut last weekend in an exhibition game against Tallahassee Rickards. Exact statistics on Clement were not available, but Rickards won 36-19.

Watkins told the Panama City News Herald he took some hits well and did well delivering the ball but will need a little more pocket pressure when Bay takes on Port Arthur Memorial on Saturday night in Beaumont.

“I’m asking him to make a decision, and he has multiple choices,” Watkins said. “All of those things, it’s a little overwhelming. But he’s gotten better. We’re getting on the same page. He’s really a big kid, and he can throw it.”

Bay could be without two playmakers, slot receiver Javyion Wilson and linebacker Joseph Boehm, due to injury. Clement can count on tight end Demond Ross as a dependable target.

Ross could also see plenty of time at defensive end.

Whoever lines up or sits out for Bay, Watkins won’t make any excuses come kickoff at Thomas Center on Saturday night.

“It’s my now job to quit making excuses,” Watkins said. “I have a house, my family’s here. It’s just time to coach ball.”

**CORRECTED to reflect that Jack Dallas has only been offered by Lamar and has not committed** WEST ORANGE — About... read more