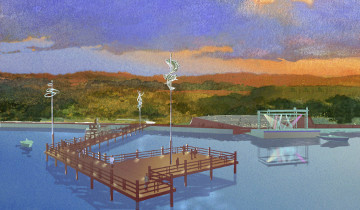 PORT NECHES — Talks of development along Port Neches’ riverfront are continuing as engineers and planners meet with city leaders and the public. 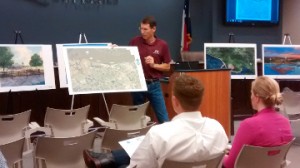 This was the second public meeting to discuss the potential development seeking public input.

The city has maintained the easement along the near-mile-long riverfront area from the park down to near the cemetery/Block Street.

One idea would be to put a 12-foot wide boardwalk or riverwalk with shaded areas, concrete bulk heading, wooden benches, lighting and more. 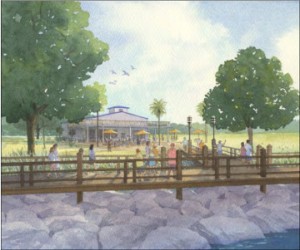 The riverwalk could, in the future, be extended from the river area, down block street, along Lee Street and back to the boat ramp area.

“Eventually we could connect up the sidewalks,” Worsham said.

One area of shoreline at the end of the boat ramp may one day feature dock cleats so boaters can tie up their boats while they enjoy the riverwalk, restaurant or any other potential development, Shelton said.

This idea came from the last meeting, in which investors with the Wheelhouse told planners that they had heard requests from customers wanting this.

Other scenarios show modifications to a long, abandoned pier that extends hundreds of feet into the waterway. The pier was once used to load and offload ships. The end of the pier will be demolished for safety reasons, but the pier itself will be re-created for patrons to enjoy.

“The Corps of Engineers, Texas GLO (General Land Office), Coast Guard, Sabine Pilots, all want the end of the pier gone,” Shelton said. “This is a win-win for all agencies.”

Mayor Glenn Johnson told attendees the city is not looking to create another Kemah.

It’s taken the city more than 15 years to get to the point it is with the riverfront property. Years ago the riverfront property was an industrial wasteland with a defunct, abandoned refinery and a barge cleaning company. City leaders made the decision to acquire the property and embark on a cleanup process of the 80-plus acres of land.

“The city had the choice to do nothing or look to the future and see what we could do,” he said. “From council’s position, it was let’s at least clean it up and see if we get a return on an investment.”

Several years ago, a group of investors came to the city with the idea of creating The Neches River Wheelhouse restaurant adjacent to the city’s boat ramp. Odds were not in their favor as that part of town is not near a major roadway.

But the eatery has prospered and their main problem, Johnson said, is parking for customers. The restaurant has even created interest in the area from possible developers.

Taylor Shelton, director of public works and the person who handles the some of the city’s grant applications, told the audience members that Kemah, however successful, did not happen overnight.

“It took 30 years,” Shelton said. “And Kemah could fit twice into what we have out there.”

In addition to the talks about riverfront development, the city is also in the process of taking care of erosion and removing debris along the shoreline through grant funds.

No final decision was made about the development. The next step is a cost analysis of different ideas.