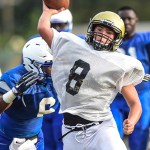 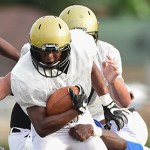 But he saw some skill players make some standout auditions Friday night.

In a 90-minute controlled scrimmage, Nederland broke open plays of 25 or more yards five times and scored four touchdowns to Sheldon C.E. King’s none. An official score was not kept.

Neumann called the most important audition of camp, for the starting quarterback role, even between junior Marshall Lange and sophomore Blaysin Fernandez, after Friday’s rehearsal. Fernandez engineered a touchdown drive on the opening series and connected with senior Dean Fisher on a 70-yard play, although it was his only completion in four attempts. Lange was 3 for 5 for 48 yards, including a 10-yard TD pass to senior Connor Perkins.

“They both had bright spots,” Neumann said. “Neither one of them had bad scrimmages. They both had some mistakes like everybody in the scrimmage, but they both had excellent decision-making, excellent balls that were thrown. It gives you some optimism on where they’re headed.”

Junior Devon Simmons may have made his strongest case to start at running back with a 56-yard scamper for a touchdown, eight plays into the scrimmage. He had 101 yards on five carries, including a 40-yard sprint later on.
Simmons anticipated he’d make some big plays.

“I’m actually proud of myself,” he said. “I just wanted to come out and show everybody what I’m about.”
The 40-yard run was followed up by Lange’s 30-yard strike to senior Kory Guidry. That set up Lange’s screen to Perkins for a 10-yard score.

Fisher, though, had the big play of the night from Fernandez, running a skinny post route.

“The line had it down. The quarterback had perfect timing on it,” Fisher said.

Fisher is satisfied with either Fernandez or Lange starting.

No clock was used Friday night. King ran 34 scripted plays in a row, matching its first, second and third strings with Nederland’s and took 12 more snaps in a row to finish the night.

But Nederland’s first-string defense proved stifling, allowing only one play of 10 or more yards.

Senior Dakota Kuhn, the fourth quarterback of the night for Nederland, rushed 2 yards for a TD and completed a 25-yard pass. Junior Nicholas Kingston added to the big-play parade with a 45-yard dash.

The Bulldogs, Neumann said, have grown from their intrasquad scrimmage a week ago when the offense and defense appeared to be even in his eyes.

“We are moving in the right direction, there is no doubt in my mind,” he said. “We are much better than we were last Friday. But having said that, I’m not going to get too excited about where we’re at because we’re a long way from being a good football team.

“But we’re moving in the right direction.”