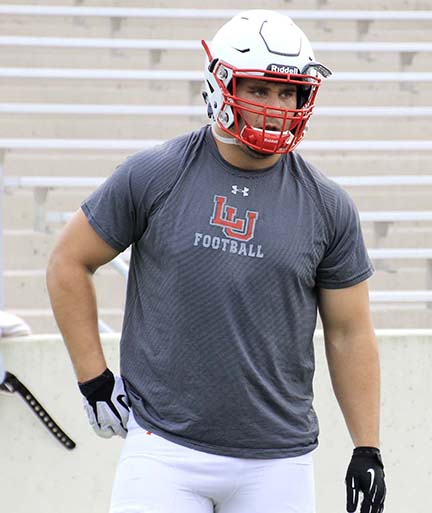 BEAUMONT — Every time Lamar running back Kade Harrington has received a preseason honor, so has right guard Bret Treadway.

Deservedly so for an offensive line that in 2015 allowed fewer than half a sack per game.

“It’s great knowing we can protect like that and no one else in our conference can do that,” Treadway said. “That just shows how good we are up front.”

But how did Treadway get the nods?

Also, Treadway has not missed a start his entire career at Lamar.

That in itself says something about the 6-foot-3, 280-pound Silsbee graduate who, according to
Langston, received just one scholarship offer out of high school.

“He just climbed to the top of the mountain because it was important to him,” Langston said.

Among offensive linemen in the Football Championship Subdivision, Treadway can say he’s up there.

“I’m reliable,” the soft-spoken Treadway said. “I do my job. I don’t make mistakes.”
Plus, he’s part of an experienced interior at Lamar. Junior center Matthew Oubre started each game in 2015 with Treadway, as did now-graduated Cody Elenz and Justin Brock at the tackles.

But with junior John Craven (18 career starts) returning from an injury redshirt season, that moves Cattaneo to working out at left tackle.

“He’s athletic enough to do it, and he had a really good spring doing it,” Langston said. “He’s got a tremendous amount of potential and he’s got the experience.”

Langston added Craven is healthy following a knee injury that kept him out in 2015, but can play either center or guard.

Now in his fifth season at Lamar, Langston boasts more depth on the offensive line than in past years, although much of that is youth. But it’s a matter of solidifying starters on the left side and at right guard to create the same “One Heartbeat” line that was efficient in pass protection. Jesse Brewster, Ethan Cothen, Joe Gonzalez, Hayden Kaaiohelo and Corey Nance are vying for starting roles as well but should see some valuable playing time.

Langston will use Saturday night’s intrasquad scrimmage at Provost Umphrey Stadium to further evaluate his line. The scrimmage, open to the public, begins at 7 p.m.
Whoever starts, Oubre doesn’t anticipate a drop-off in performance from last fall.

“We have a really good relationship with our quarterbacks,” he said. “We hang out with Carson, and we did with Joe as well. We just try to keep it loose. We’re never tensed up. If something bad happens, then we aren’t just jumping ship. We just stay loose, have fun and play the game.”

Tickets for UH game at LU office
Lamar announced that tickets for the Sept. 10 game at the University of Houston are on sale at the LU Ticket Office, located in the Montagne Center on the west side.

Tickets are $30 each and will be available for pickup immediately. Fans can order by calling the office at 880-1715 or visiting LamarCardinals.com. Walk-up orders are accepted at the office as well.

The office is open Monday through Friday from 8 a.m.-5 p.m.
Tickets must be picked up prior to 5 p.m. Sept. 8. Those who need Americans with Disabilities Act information are asked to call the office directly.
•
I.C. Murrell: 721-2435. Twitter: @ICMurrellPANews

Bridge City out of game Week 6

BRIDGE CITY — The Bridge City Cardinals are again searching for a 10th football game, thanks to the Brock Eagles.... read more