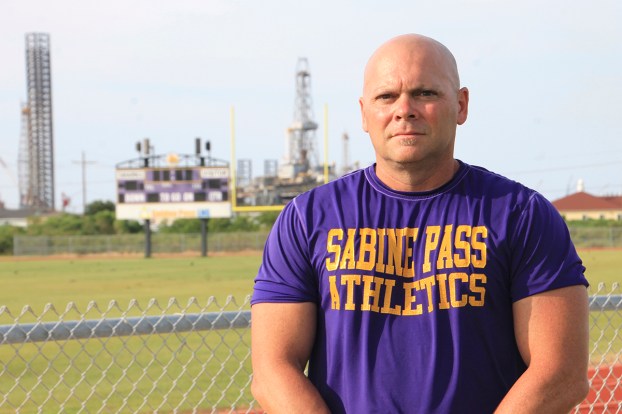 SABINE PASS REPORT: Back in the saddle: Thibodeaux leads pool of Sharks again

Two weeks ago, Jason Thibodeaux was not planning to lead the Sabine Pass football team. He had already done that for seven years before taking an assistant role to spend more time with his family.

But it didn’t take long for plans to change.

The Port Neches-Groves graduate has been elevated back to the helm due to Trey Harvey’s departure just in time for the first week of practice. Harvey, who was the Sharks’ head football coach for the past four years and boys basketball coach for nine, has accepted an assistant principal position at Bridge City.

Thibodeaux, whose first stint as the football Sharks’ chief lasted from 2005-11, cautioned it’s not all about him.

“It’s all about the kids,” he said. “You think about the kids first and what we need to do to get better. You learn from last year, watch a lot of game film and get back in the saddle.

“It’s exciting, but it’s all about the players on both sides, boys and girls.”

That would be because Thibodeaux also replaced Harvey as the athletic director, another position the former held while being head coach.

The Sharks, who have lost 17 straight, have been grinding through two practices per day with only 14 players, but Thibodeaux is expecting more to join the 2A ballclub by the time school resumes Aug. 22.

It’s an all-too-common scenario for Sabine Pass, whose roster grew to about 28 players last season. But if there’s one thing Thibodeaux has inspired the Sharks to do, it’s to never give up, quarterback Dominique Wilson said.

Still, the Sharks are embracing a big challenge.

“It’s more challenging this year because, you know if you only have 14, you have no depth chart,” Thibodeaux said. “You have to stay healthy, and you have to take every precaution to make sure they are healthy and they stay safe.”

“Our conditioning was real high. I kind of back off a little bit, more water, more little breaks. I talk to them more, get a little more chalk talk in and tell them what our philosophy is going to be. And I do what I can to help them prevent injuries.

Middle linebacker Braden Miller said working out with low numbers actually benefits the Sharks mentally and physically — not that he wouldn’t want to see more start working out.

“Some of the guys that come out, they don’t know the stuff that we go through, the heat, the sweat, … everything,” he said.

The Sharks have gotten help in the way of a transfer, former West Brook slot receiver Glenndell Walker.

“Coming from a bigger school, transitioning into a much smaller school, it is different because you have to prepare yourself to be on the field at all times, no matter the cost,” he said.

MEMORIAL REPORT: No pressure: Titans embrace change to 22-5A

If the Port Arthur Memorial Titans are feeling any pressure dropping from Class 6A to Class 5A, they aren’t showing... read more