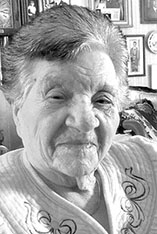 Alice was born on December 20, 1921 in Grand Chateau, Louisiana to parents Alice (Breaux) and John Stelly. She had lived in the Port Arthur area since 1960, prior in Louisiana. She was a member of St. Theresa the Little Flower Catholic Church in Port Acres for many years. Alice was a loving mother, grandmother, aunt and friend who will be missed dearly.

A visitation will be held on Thursday, August 4, 2016 from 5 pm until 8 pm at Clayton Thompson Funeral Home, with a rosary to be prayed at6 pm at the funeral home. A Christian Burial service will be held at 11 am on Friday, August 5, 2016 at Clayton Thompson Funeral Home; Rev. Rejimon George, C.M.I. will be the celebrant. Burial will follow at Memory Gardens in Nederland.