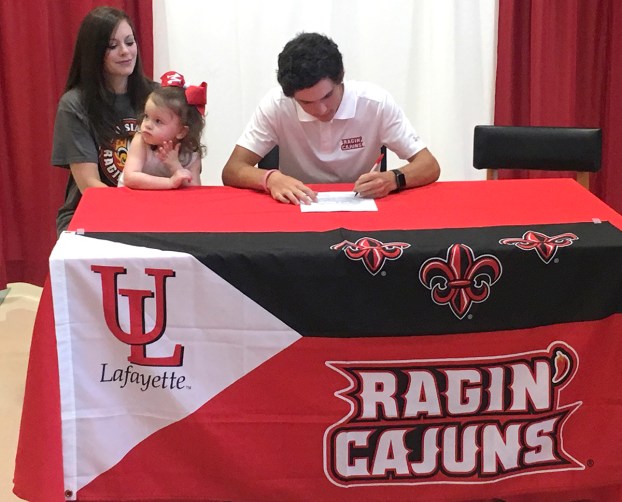 Petroski on Thursday made college life include more time spent on the links. He signed with the University of Louisiana at Lafayette.

“It really is a blessing,” Petroski said. “It came out of nowhere. Two random spots opened up and coach [Theo Sliman] called me and asked if I would like to play for him. I couldn’t resist it.”

The offer came with about two weeks before Petroski graduated from Bridge City. He had one offer from another school and was having to wait to see if another player took the scholarship spot.

Then came the opportunity to play for the Ragin’ Cajuns.

“Lafayette is a beautiful campus,” Petroski said. “I loved the atmosphere and the support. Everything there is beautiful.”

Petroski played on the varsity team at Bridge City all four years of high school. He was the district champion in each of his last three years as a Cardinal and made four trips to the regional tournament.

Petroski reached the state tournament in his last three years at Bridge City and placed in the top 20 as a senior.

He was nominated for the Babe Zaharias Player of the Year award three straight years and won the award in 2016. He is also the 2016 Golf Player of the Award given out by the Southeast Texas Coaches Association.

“I am extremely proud of Skylar,” Bridge City golf coach Lance Wallace said. “He has put in a lot of work over the last four years and he is at it every day. The practice is what put him at this point.”

Petroski does not have to look far for inspiration. Southeast Texas has become a hot bed of local talent playing on both the PGA and Web.com Tours.

“Those guys are inspiring,” Petroski said. “I sit back and watch them and know they came from our area. I want to one day be on their level and playing with them after college.”