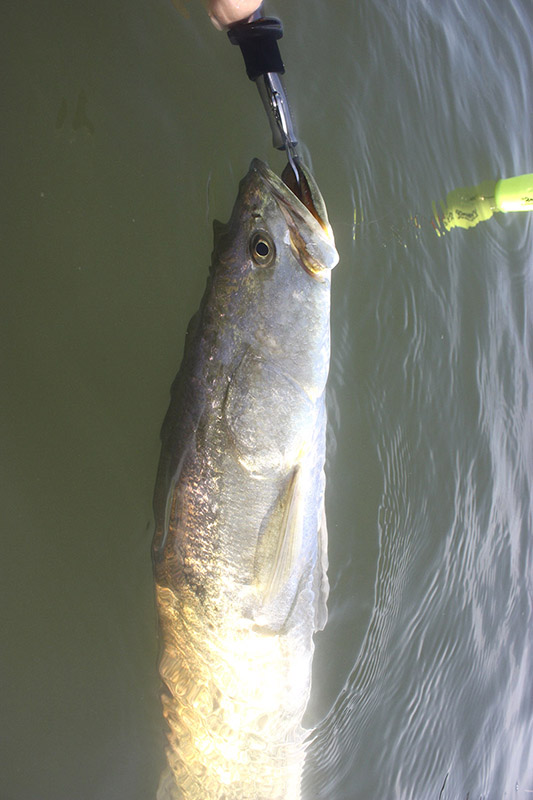 Trout can sometimes be caught in unusual areas during periods of drought. (Photo by Chester Moore, Jr.)

The amount of feedback from local anglers on issues ranging from laws to fishing locations has been strong over the last few weeks. We have been getting many questions and thought we would address some of the ones that are the most commonly asked and unique in this column.

• Q: You mentioned the presence of catching flathead catfish in local bayou and river systems. What do you think is the maximum size for these fish here?

• A: Flatheads have been known to reach more than 100 pounds but the largest one I have heard of in local waters was about 70 pounds and that one was caught in a rice canal. The biggest I have caught in the Adams Bayou area was in the 20 pound class. My suspicion is there are some really big ones but the average catch will be in the 10-20 pound range.

• Q: Is it true that is illegal to retain any redfish in Gulf waters?

• A: Anglers are not allowed to retain any redfish in federal waters out of the Gulf of Mexico. In Texas we claim nine nautical miles so redfish retention is banned beyond that.

• Q: Why doesn’t Sabine Lake have tripletail in it like the Matagorda Bay system?

• A: I don’t really have an answer to that other than Matagorda has always had large number of tripletail. They will occasionally come into Sabine Lake and actually Lake Calcasieu gets a fair amount in their channel from time time during summer months. Why not Sabine? I can find no particular reason.

• Q: Is it true there used to be tarpon in Sabine Lake-like a lot of them?

• A: My grandfather used to talk about the tarpon here and it made me curious about their presence. Then about 15 years ago I saw a bunch of photos from a tarpon tournament held in Port Arthur with some impressive specimens brought in. Like tripletail, tarpon will occasionally come into the lake (I saw one in 1996 in Old River Cove) but for some mysterious reason they are not present like they were so many years ago.

• Q: What is the farthest north in the Sabine River you have ever caught speckled trout?

• A: I have caught them just south of the Interstate 10 bridge but I know people who have caught them as far north as the old cement plant area during drought conditions. A few years back anglers were catching croaker in Deweyville so I suspect trout were far up the river as well.

• Q: Why don’t anglers use the old shrimp or “tout” tails anymore? They used to be all the rage.

• A: Anglers in many cases follow trends as much as young kids do with clothes. One minute a lure is in and another it’s out. Shrimptails worked because they look like shrimp and trout still eat shrimp so they will still work. Funny thing is I went out looking to buy some shrimptails recently and couldn’t find any. There are tons of great looking shrimp imitations but the classic shrimp tail is difficult to find.

• A: They are excellent! They are a little difficult to fillet but few fish have finer meat than sheepshead. My late grandfather George Moore fished for them almost exclusively and relished in their delicate white fillets. If you haven’t tried sheepshead, give it a shot. You will not be disappointed.

• Q: If you could pick one spot in the entire Southeast Texas area to fish and never fish anywhere else where would it be?

• A: This is a difficult question. If the seas were calm every day it would be the jetties. I love jetty fishing. However a more realistic answer would be Black’s Bayou. You can catch reds, specks, flounder, sheepshead, drum, gar, catfish and bass and it is never too windy to fish in there. Plus you can go to certain areas and almost never come across other boats. I love the solitude.

• Q: Do you think taking a kid crabbing is a good way to introduce kids to the great outdoors?

• A: Absolutely. Crabbing is action packed, fun and the results taste good. Make sure and help the kids get the hang of netting the crabs and go out late in the evening or early in the morning before the temperatures sore into the upper 90s. You might just hook a kid on the outdoors for life.

To contact Chester Moore, e-mail him at chester@kingdomzoo.com. You can hear him on “Moore Outdoors” Fridays from 6-7 p.m. on Newstalk AM 560 KLVI or online at www.klvi.com.

BRIDGE CITY — The quick turnaround was well worth it. By 11:30 p.m. Tuesday at Faulkner Field in Tyler, Bridge... read more