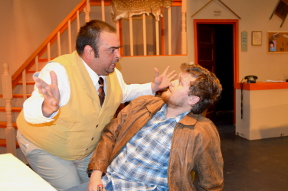 The season finale of “The Foreigner” will take the stage for the final weekend performance of a comedy penned by American playwright Larry Shue.

Port Arthur Little Theater’s production of the two-act play features a cast of seven actors — many of which have years of acting experience.

Set in a rural fishing lodge in Tilghman County, Georgia, the story features two Englishmen, Froggy and Charlie, who are guests at the lodge. Shy Charlie only agreed to go on the trip after his wife begged him to.

Because of his introverted nature, when others visiting the lodge try to converse Charlie remains silent, not letting on that his wife is ill. When Charlie cannot find the words to reply Froggy tells the lodge guests that his friend cannot speak English. In fact, Froggy elaborates, Charlie is from an exotic country.

Satisfied with the explanation, the lodge guests begin to talk freely among themselves while revealing secrets and scandals.

Since opening weekend “The Foreigner” has drawn large crowds.

“So far it has been great,” Walker said. “We have had wonderful audiences, and drew large crowds for a non-musical.”

The seven-member cast is small compared to many stage plays.

“The cast is a lot of fun. A couple of them I have worked with before and we’ve had a couple of cast changes caused by emergency family situations,” Walker said. “The ones that stepped in are great, everybody gets along and we all have a good time.”

Tickets are $11 for adults, $9 for seniors, teachers and military. Children and students get in for $6.