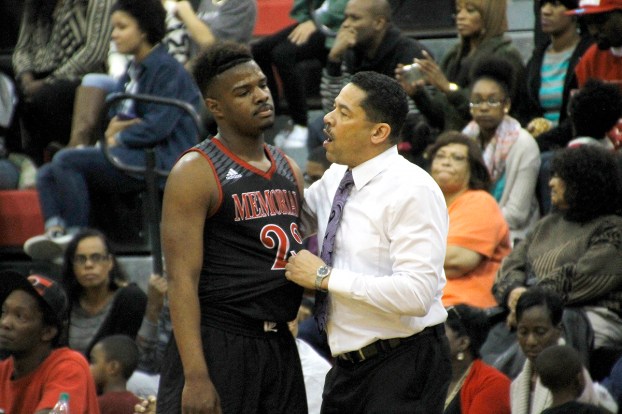 Memorial coach Kenneth Coleman talks with Tyryn Hinton during the second half against Kashmere on Tuesday. (I.C. Murrell/The News)

Starting a streak: Titans start off tourney with second win in row

Tyryn Hinton made his teammates aware of his feelings going into their home James Gamble Basketball Tournament.
“We’ve just been having a bad season, so we’re tired of losing,” the Port Arthur Memorial center said. “Before the game I told my team, ‘Look, it ain’t no more losing. We’re trying to win.’ We’re going to state, so we’re starting it off in the James Gamble.”
Hinton may as well have carried the load Tuesday, scoring seven of Memorial’s first nine points and finishing with 11 points in a 56-39 win over Houston Kashmere. It started the first win streak of the season for the Titans (6-10), and it set up Memorial’s semifinal with Beaumont Kelly for 11 a.m. Wednesday.
Kelly edged Lake Charles Washington-Marion 63-61 in the day’s first game. The winner will face a Beaumont ISD team, Ozen or West Brook, in the championship game at 6:30 p.m. Wednesday.
A Jefferson County team has won the tournament the past three years, with Memorial winning the last two.
“We just try to concentrate on the things we do to get better at what we do,” Memorial coach Kenneth Coleman said. “We have to develop an identity before we can concentrate on other teams. The big picture is what we’re looking at, which is district.”
The Titans, who are already 1-0 in District 21-6A, showed no rust from their last outing, a 57-52 win at Channelview on Dec. 18.
“That’s a good thing,” Coleman said about avoiding a rusty return. “That was a pleasant surprise.”
Hinton’s strong start sparked a 15-0 lead the Titans would not relinquish. Kashmere (5-9) started cold from the field and did not make a shot until a three-point basket at the 1:53 mark of the first quarter.
“Hinton’s a senior, and we’ve been looking for senior leadership,” Coleman said. “He plays hard, and he’s one of our better offensive ballplayers. We try to get him to buy in on defense so we can get help on both ends of the floor.”
The Rams did find their shot in the second quarter and stayed within 29-18 at halftime. Ben Mitchell, who had nine points, found many of his opportunities at the foul line, where he made 4 of 6 free throws.
Kashmere pulled within nine points twice in the third quarter, but sophomore Thailan Wesley quickly padded Memorial’s lead to 35-22 with a three-point bucket. Wesley, a regular key contributor for the Titans, scored eight points coming off the bench after dealing with back soreness.
“It was minute-to-minute. We didn’t know if [Wesley] was going to play today,” Coleman said.
Memorial won with heavily balanced scoring. Tyler Guidry had 10 points and Deon Williams also went for eight for the Titans. Deyleon Griffin was Kashmere’s only double-digit scorer with 10.
In other games at the James Gamble Tournament: Beaumont Ozen routed Hardin-Jefferson 74-48 behind senior guard John Comeaux’s 32 points; and West Brook romped past Houston Fallbrook Christian Academy 74-49.

Indians get day started with no rust

BRIDGE CITY — Pat Abel had reason to worry his Port Neches-Groves Indians would come out flat Monday against the... read more