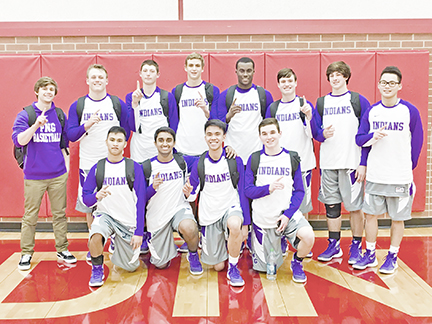 BRIDGE CITY — This was exactly what Port Neches-Groves coach Pat Abel wanted for his Indians.
The Indians swept through the Bridge City Holiday Classic days before the team starts District 22-5A play at 2 p.m. Saturday in Baytown against the Lee Ganders.
PN-G (8-5) defeated the Bridge City Cardinals 69-43 in the tournament’s championship game Tuesday evening.
It was the first tournament final for the Indians since winning the Bridge City Holiday Classic in both 2008 and 2009.
PN-G won this one on the back of shooting 60-percent from behind the arc against Bridge City. The Indians took 20 treys and knocked down 12.
The Indians also worked the ball inside the paint. PN-G had 25 shots near the basket and made 12 of the attempts. Bridge City was 8-of-23 inside the paint.
Adam Morse led the attack with five three-pointers. He scored 21 points to go with five rebounds.
Teammate Ryan Abel had 16 points and 13 rebounds while Derrick Papa scored 19 points. Papa was 7-for-9 from the field and hit two-of-four three-pointers.
Abel was 6-of-9 shooting and 3-for-3 behind the arc.
PN-G was hot from the floor all game long. The Indians were 24-of-46 from the floor, 52-percent.
“It was an unbelievable job by the kids,” Pat Abel said. “They came off the break and they were refreshed and ready to go. That was our final tune up for district so bring it on I guess.”
The Indians came out and scored 19 points in the first period and held the Cardinals to 11 in the game’s first eight minutes.
Then, in the second PN-G outscored Bridge City 17-7 to build a 36-18 lead at the break.
“This was a confidence booster,” Ryan Abel said. “My last three years on varsity we have struggled at this tournament. This is good motivation for the rest of the year.
“Sometimes you just get hot. The outcome is what we wanted.”
The only part of the game the Indians did not dominate was from the free throw line.
PN-G shot 9-of-20 from the line and Bridge City was 6-of-11 from the charity stripe.
The Indians outrebounded the Cardinals 35-27 and forced 12 Bridge City turnovers.
“It feels great,” Edsel Damo said. “It gets us ready for district. We had a lot of confidence tonight shooting the threes. We are confidence right now. We are ready.”
Ryan Mirabella led the Cardinals with 20 points on 7-of-10 shooting. Mirabella sank 6-of-9 shots from behind the arc.
The Indians did a great job defensively on Bridge City’s Graydon Glover who scored seven points on 3-of-9 shooting.
Damo and Keynel McZeal both finished with five points for the Indians. Damo added seven rebounds and McZeal pulled down six boards.

Starting a streak: Titans start off tourney with second win in row

Tyryn Hinton made his teammates aware of his feelings going into their home James Gamble Basketball Tournament. “We’ve just been... read more