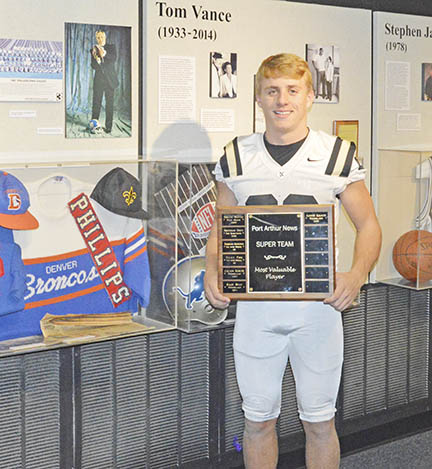 Nederland running back Austin Krautz led the Bulldogs to a share of the District 22-5A title in 2015. (Gabriel Pruett/The News)

Austin Krautz’s name will remain in the memories of Nederland Bulldogs fans for a very long time.
Why?
The kid can and did do it all for the Bulldogs.
He rushed for 1,895 yards on 237 carries with 22 touchdowns his senior year. He also hauled in 28 receptions for 386 yards and four more touchdowns.
His Bulldogs won a share of the District 22-5A championship and lost in the second round to George Ranch, which defeated Lake Ridge, 56-0, in the Class 5A Division I state title game.
“It is a great feeling,” Krautz said of being named MVP of the Port Arthur News Super Team. “I know my team made it possible to get MVP.”
There were three major highlights in Krautz’s head from the 2015 season at Nederland.
First, his Bulldogs won at least a share of the district title for the fifth season in a row. Second, he leaves the Bulldogs program undefeated against rival Port Neches-Groves.
Lastly, his team won a playoff game and was eliminated by an eventual state champ.
“I kept up with the state game on Twitter,” Krautz said. “I liked how we played better against George Ranch than the team in the state game.”
Krautz and the Bulldogs were not picked to win district this season by too many people, if any at all. This nugget did not bother the Bulldogs, who always love being the underdogs.
“I knew I would have to have a big year this year,” Krautz added. “My main goal was to be a bigger leader this year. This year was the same as it has been since my sophomore year. You know you are going to be the underdog. At Nederland, we do whatever we can to win games.”
Krautz will continue playing football in Southeast Texas as he is committed to play at Lamar University.
“That is an amazing feeling,” he added. “Playing college football was something I always had in the back of my mind and never really thought I would be able to do. To be able to play right here at home is the greatest thing.”