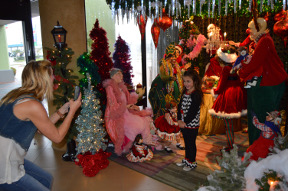 Visions of Christmas past are on display at Port Arthur’s Holiday Inn Park Central where old and new holiday decorations combine to offer a glimpse into bygone Yuletide celebrations.

At the intersection of U.S. 69 and Jimmy Johnson Boulevard, the Holiday Inn’s lobby is filled with unique Christmas decorations — all collected by the hotel’s owner Kathi Rachwal.

Many of the decorations depict and old-fashioned Christmas — one where the women in the family gather in the kitchen to visit while preparing the holiday meal.

Guest Service Representative Bruce Oler, 66, has worked at the Port Arthur Holiday Inn for 15 years and remembers the first display 16 years ago.

“It has grown and grown. There’s a little bit more every year,” Oler said.

New this year is a near floor-to-ceiling nativity scene that replaces a smaller one from year’s past.

Every year the hotel’s owner comes to Port Arthur from her home in Dallas to oversee the decoration process.

Typically it takes two to three weeks for the hotel’s maintenance crew and Rachwal to complete the exhibit, and about a week less to take it down.

All of the decorations are stored in Port Arthur. The smaller, more fragile pieces are unpacked by the owner when she arrives, Oler said.

Over he years, the display has become an area holiday attraction. Not only does it delight hotel guests, but others drop by throughout the holiday season to look.

Tina Benoit, 54, of Groves brought her 5-year-old granddaughter Sophia Simon Wednesday to look at the decorations.

“My future mother-in-law said I had to bring her by to see the decorations. She said they are just gorgeous, and they are,” Benoit said while taking a photo of her granddaughter in front of one of the exhibits.

In addition to the new nativity scene and a trim on the large front entrance Christmas tree, the exhibit features all the regulars: life size old women dolls visiting in the kitchen before cooking the holiday meal, Mrs. Clause in her bed, a peacock trimmed tree, and Candy Cane Lane just to name a few.

Oler said hotel guests are always in awe of the decorations.

“Yesterday one person said they felt like they walked into Wonderland,” Oler said. “We get a lot of comments on the life-size dolls, antique lights and just the sheer variety of decorations.”

Anyone is welcome to stop by the hotel and look at the special exhibit, which will be on display until about the second week in January.

Santa, all dressed in blue, held a quick photo session with youngsters as parents picked up garbage bags full of... read more