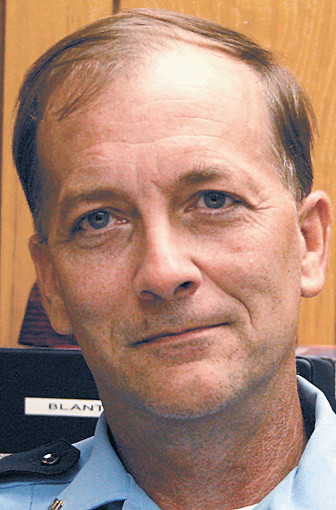 Blanton’s official last day is Dec. 31, but he has agreed to stay on in the police chief role in a temporary position until the city finds a replacement.

“It’s time. I had always told myself I wanted to retire at 55; I put it off, told Mr. Comeaux, who was acting city manager at the time, that I would stay and give the new city manager time to adjust,” Comeaux said. “So I have, and now its time. Forty years is a long time to be in uniform.”

Though he’d had a few jobs in high school — one of them at the Port Arthur Blood Center — when he hired on with the police department on April 24, 1976, Blanton found a home.

“I’ve been there ever since, been a policeman all my adult life,” he said.

On Nov. 11, 2005, Blanton was named chief of police, and has led the department in making numerous improvements.

Under his direction, Port Arthur’s police department gained a dedicated traffic unit. Since then, the traffic fatality rate has decreased tremendously, he said.

Blanton also implemented a street crimes unit, which he credited for reducing the number of drive-by shootings.

Blanton said he was particularly proud of the departments transformation from one behind-the-times in technology to a department that is now not only caught up, but leading other departments in some areas.

“When I became chief we virtually had no technology,” Blanton said “Now, we have caught up with everybody else and surpassed other departments in some areas.”

Port Arthur’s police department was the first to get license plates readers, he said.

Blanton praised City Council for supporting his efforts to upgrade the department.

With retirement now in sight, Blanton said he plans to raise cows and spend time with his six grandchildren. He also hopes to find time to do some hunting and fishing.

“I am so happy for Mark. He’s given so many years of his life and he has sacrificed time from his family, and that is saying a lot because he is such a family man,” Deloris “Bobbie” Prince, Port Arthur mayor, said. “He has served the people of Port Arthur for many, many years, and has done it with integrity and dignity.” I am just so proud of him, of the job he has done, and am proud of his family for giving him the space to do what was required of the job.”

Blanton can work up to 1,000 working hours before the position becomes fulltime once again.

“That will be in the middle of June, so I am sure we will have somebody in place by then,” Blanton said.

A Port Arthur priest is under investigation by the Port Arthur Police Department and Child Protective Services following an allegation... read more