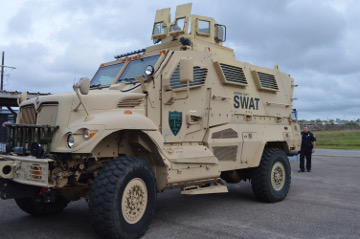 People across the nation watched as a Special Weapons And Tactics team cautiously approaching a bullet ridden SUV as a helicopter videoed the incident from above during the terroristic events in San Bernardino, Calif. earlier this month.

The highly trained individuals carried special gear and were assisted by more members and an armored rescue vehicle with gun turret.

Although southeast Texas has not seen this type of terroristic scenario, local SWAT teams have successfully responded to dangerous events.

There are currently three SWAT teams in our area — Port Arthur, Beaumont and Jefferson County Sheriff’s Office, which is multi-jurisdictional. Port Arthur Police Department’s team consists of a lieutenant, three sergeants and 11 police officers that work within all divisions in the department and there is one Port Arthur Fire Department medic assigned to the team, according to information from the PAPD.

“They are specifically trained to deal with high risk situations such as the service of search and arrest warrants, armed and barricaded suspects, mentally deranged and dangerous persons and hostage rescue and negotiations,” according to PAPD’s website.

Beaumont Police Department’s SWAT team was formed in the early 1970s and includes members from all divisions as well. Their team consists of 22 officers, each with regular duties within the department and are on 24-hour call.

The Jefferson County SWAT team consists of 20 members and three negotiators. Team members are also members of the Port Neches and Nederland police departments and the Shierff’s Office.

Maj. John Shauberger, a SWAT team member with the Jefferson County Sheriff’s Office, didn’t see much of the San Bernardino incident as it unfolded live via television but is up to date on the scenario.

The scenario of an active shooter brought back thoughts of the 2012 deadly shooting outside the Jefferson County Courthouse. The suspect, Bartholomew Granger, shot four people, killing one, while on trial for aggravated sexual assault. Another of the victims was shot then ran over with Grangers car.

Seven Beaumont Police officers and two sheriff’s deputies engaged in gunfire with Granger who fled to a nearby business where employees helped in his capture.

“Beaumont PD and our SWAT responded, Shauberger said. “The San Bernardino incident is not dissimilar in that we would respond to an active shooter.”

The whole idea behind an active shooter incident is to contain and control the situation.

“It’s an ever evolving situation,” he said.

Homes in the immediate vicinity were evacuated and a nearby middle school was notified.

Local police and SWAT members responded and closed off several blocks in the area for about four hours. The man eventually took his own life.

When deputies approached, a person came out of the home and said that Gillum Arnold had fled to the attic armed with a pistol.

Deputies immediately backed away form the home and a SWAT team entered the area. The man ignored communication requests for some time. Five minutes before SWAT made entrance they were able to communicate wit the man verbally that told them he was on the floor and couldn’t get up. Arnold was taken away by medics and no one was injured.

A safety zone was put into place and dispatchers tried to contact the caller to no avail. Jefferson County SWAT responded and also made attempts to contact the caller. It was later learned the call was placed by an internet caller as a hoax. This is commonly known as swatting or caller ID spoofing where a person places a false emergency call to get mass response by first responders to an incident that doesn’t exist.

Shauberger said there is a good relationship between the three SWAT teams in the area.

“We would like the public to know we are committed to public safety,” he said. “We train for this and acknowledge there are horrible things occurring the world today and we do what we can to prepare for that. We always keep the public’s safety in mind. These guys on the teams, they volunteer for this and their effort is second to none. I’m proud of them and proud to be part of the team.”

Special Weapons And Tactics team members go through intense training, putting their lives on the line to save others.

SWAT members and Jefferson County Sheriff’s deputies Marcus Mclellan and Deputy Jerry Droddy shed some light into what goes into the training.

Each member of the JSCO SWAT team carries 50 pounds of gear when responding to an incident. Their priorities are set; safety of citizens, other first responders and teammates.

“The basic SWAT school training meets the standards set for the state,” Mclellan said while seated inside the JSCO’s armored rescue vehicle. SWAT teams are members of the Texas Tactical Police Officers Association, which in turn in a member of the National tactical Offices Association. “Everybody in the state of Texas and nation gets the same fundamentals. That way we can join in any of the three local SWAT agencies and work together.” 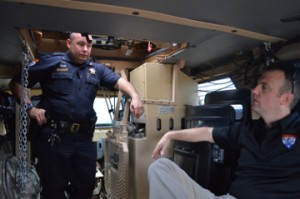 “You adapt, you train such that it’s second nature. If he goes to the left, you go to the right. He trusts his life with me and I trust my life with him,” Droddy said. 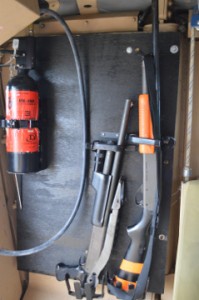 A photo of some of the equipment inside the SWAT vehicle.
Mary Meaux/The News

Mclellan explained that trust goes with the job if they are to go home safely at the end of the day.

“It sting,” Droddy said of the stress inoculation drills. “When I first joined the team my heart race was high during scenarios, you think quick. Now, I’m calm.”

The team includes an administrative commander who handles legal issues and policy that needs to be followed, a tactical commander who develops the action plan for the team, negotiators and operators who perform the plan.

“We undergo mandatory 16 hours a month training and also a 40 hour week of training within the year,” SWAT member and JSCO Maj. John Shauberger said. “We train a full week as a team.”

During the weeklong training, which normally equates to way more than 40 hours, the teams go through different scenarios, shooting practice and tactics.

The JSCO armored rescue vehicle is big and tough. It holds six to eight team members not including the driver and a co-pilot who is either a tea leader or medic. The vehicle is a 2007 Maxxpro, formerly a military vehicle. The Sheriff’s Office obtained the vehicle through the 1033 Program through the National Defense Authorization Act.

The SWAT vehicle, which weighs 30,000 pounds, includes a movable gun turret and is made from ballistic grade steel.

Neither Droddy or Mclellen think much about the fact they risk their lives when on SWAT duty.

“IN the moment you have your job to do,” Droddy, a third generation officer, said. “You get to the point where you don’t think about it. I tell my wife the only time to worry is if a bunch of officers show up at the house and I’m not with them.”

After a SWAT incident is concluded, the group will go through a debriefing and evaluate their actions to see what they could have done better, Mclellan said.

“There’s no such thing as perfect,” Droddy responded. “Everything is such a fluid situation and can change at a moments notice. But you still have your job to do.”

A major traffic accident occurred about 8:40 p.m. Saturday in the 3600 block of Texas 73 near the Ninth Avenue... read more