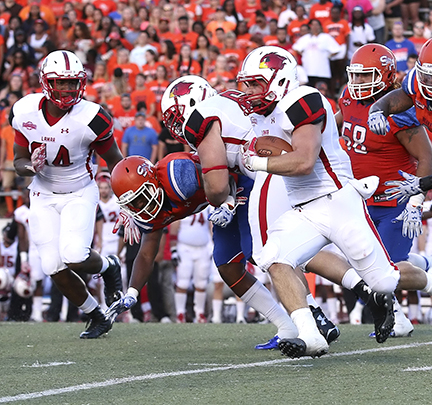 Lamar sports information
BEAUMONT – The honors continue to roll in for 2015 Southland Conference Player of the Year Kade Harrington. The Lamar University junior running back has been named the American Sports Network Player of the Year announced network officials Thursday afternoon.

“What a tremendous honor, and one that I think is deserving,” said head coach Ray Woodard. “Kade had an outstanding season, and it was a pleasure to watch him run the football.”

The ASN Player of the Year award is based purely on fan vote. Harrington was selected in a runaway vote. He received the honor over Chase Edmonds (RB – Fordham), Scott Hosch (QB – Harvard) and Jacob Huesman (QB – Chattanooga).

Harrington closed out a record-setting campaign by becoming just the seventh back in NCAA Division I history to rush for 2,000 yards in only 10 games – joining a list that includes Marcus Allen and Barry Sanders. A former ASN National Player of the Week selection, Harrington led the nation in total yards (2,092), rush yards per game (190.2 ypg), rushing touchdowns (21) and all-purpose yards (213.36 ypg). He also finished ranked among the nation’s top three in scoring (12.5 ppg) and yards per carry (7.86 ypc). During Southland Conference play, Harrington averaged better than 220 yards per game.

Along the way, Harrington set Southland Conference records for rush yards in a game, yards in a season, yards per game and points per game. He also set LU single-game and season records for all-purpose yards, and a single-season record for rushing touchdowns, on his way to becoming the school’s all-time leading rusher in just under three seasons.

In addition to his long list of records set, Harrington also became the first player in school history to rush for at least 100 yards in eight consecutive games. In six of those games he rushed for at least 200 yards, including a school-record 347 against Abilene Christian. For his efforts on the field, he was named the SLC Offensive Player of the Week three times, and STATS FCS National Offensive Player of the Week twice.

Harrington is still in the running for more hardware this season. It was announced Tuesday afternoon that Harrington is one of three finalists up for the STATS FCS National Offensive Player of the Year award – FCS football’s version of the Heisman Trophy. The awards banquet will be held in Frisco, Texas, Friday, Jan. 8th on the eve of the National Championship game.

Indians turn it around after scoreless first quarter

NEDERLAND — Pat Abel has seen some bad quarters before in his 16 years as head coach at Port Neches-Groves.... read more