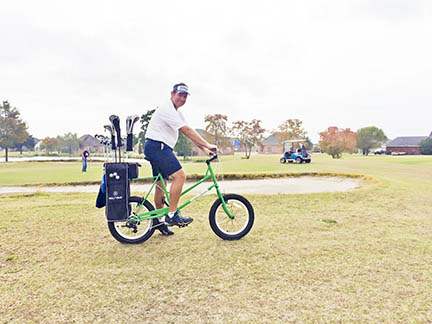 Jon Williams was the center of attention at Babe Zaharias Memorial Golf Course this past Saturday, and it had absolutely nothing to do with rolling in five birdies on the way to a best ever round of 72.
Williams, you see, pedaled 18 holes on his new toy that’s officially known as The Golf Bike. In so doing, he is believed to be the first person to use the clever invention of Floridian Todd May on a golf course in the state of Texas.
“I got a lot of stares and plenty of questions,” said Williams, an advisor for LPL Financial in Nederland. “People thought it was pretty cool.”
May, the president of Higher Ground Golf Co., developed The Golf Bike as a way to combine two of his passions — biking and golf. After four years of tinkering, he presented it as part of the Inventors Spotlight at the massive PGA Merchandise Show in Orlando in 2013.
While it may not have taken what has become an increasingly sedentary sport by storm, The Golf Bike is making inroads with those who would rather not ride
the traditional cart but don’t have the time to walk. Courses in 13 states now offer the option of riding The Golf Bike. Colorado is the leader in the clubhouse with nine courses.
Williams, who tries to play twice a week and prefers to walk, says he was immediately intrigued by an ad for the bike in a golf magazine. He followed up by talking with a person in The Golf Bike’s offices and wound up getting a 20 percent discount off the $999 retail cost.
“They said I would be the first one in Texas to have the bike and that others would see it and want to order it,” Williams said. “They told me to be prepared because there would be a lot of questions from other golfers. They were certainly right about that.”
Williams’ primary motivation in buying The Golf Bike was to speed things up for other golfers in his group when he was walking the course.
“I like to walk and get the exercise you get in 18 holes,” he explained. “But when I’m walking I feel like I’m slowing other people down. I figured the bike would help me keep up and it did. The first time out with it was a good experience. It definitely moved me faster. I got plenty of exercise but I wasn’t as tired as I am after walking 18 holes.”
The Golf Bike is so simplistic in appearance many will wonder why they didn’t think of the concept. It has two small golf bags on the back — one for irons, one for woods — with enough space for 14 clubs. There is even a cooler
bag for drinks. It has small wheels, wide tires, a step through frame and features six speeds.
Williams’ maiden voyage at Zaharias was a learning experience marked with only a couple of three putts. He parked wrong on slopes a few times and the bike tumbled to the ground. Late in the round there was a problem with handlebars that had not been tightened enough. He wound up having to walk the bike on the final hole, but quickly resolved that issue with an Allen wrench.
“Overall, I was really pleased,” said Williams, who dismissed as pure coincidence shooting par for the first time. “It was a great investment to make. I can see it becoming popular with golfers who want to get more
exercise.”
Promotional material for The Golf Bike touts more than the exercise value.
“Our vision is to help grow the game of golf by introducing a new alternative to walking and taking a cart,” May touts on the website www.thegolfbike.com.
“The Golf Bike will change the way you play and practice. It’s about fun. It’s about fitness. It’s about Time!”
Among those who quickly bought in was famed instructor Butch Harmon.
“Best new thing I saw at the PGA Show.” Harmon was quoted as saying after seeing it for the first time. “The Golf Bike. Play fast and get a workout. Pretty cool.”
Being cool, in fact, may be The Golf Bike’s best selling point. In a sport desperately seeking more cool, and more appeal for kids, it could be a game changer.
Jon Williams is certainly on board.
CHIP SHOTS: The team of Don MacNeil, Ray Gallier, Ray Trahan and Allen Suire won the Babe Zaharias DogFight with 18 points. Second with 16 pints was the foursome of Drake Romero, Bill Hammond, Bob Moore and Ben Thornton.
Closest to the pin winners were Dwain Benoit (No. 2), Larry Rogers (No. 7), Tom LeTourneau (No. 12) and Ashley Choate (No. 15). …
The Senior 50 Plus Game at The Babe was played in a best two-ball format. Tying for first on the front nine at minus 3 was the team of Richard Briggs, Rick Pritchett, Ed Hetzel and Pete Reobroi and the team of Bob West, Mark Petry, LeTourneau and Paul Brown. On the back, the team of Roddy Weatherly, Dillard Darbonne, Larry Foster and Bill Draughon tied with the West team at minus 1. …
The Super Saturday Game at The Babe was played in a two-ball format. On the front, there was a four-way tie at minus-3 between teams captained by Gary Whitfill, Craig Fontenot, Pritchett and Bill Hanley. The back was won in minus 4 by the team of Fontenot, Harrell Guidry, Charles Leard and Dan Flood.
•
Golf news should be e-mailed to rdwest@usa.net.