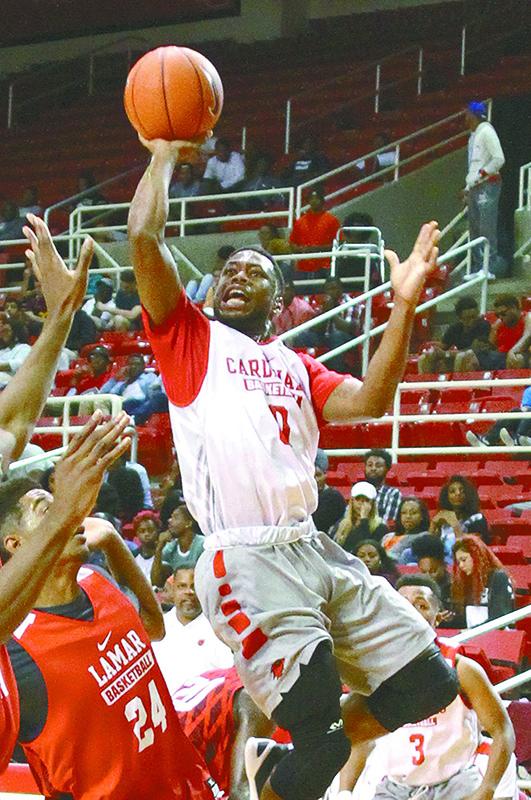 Kevin Booze scored 25 points for Lamar in its last game, a 92-84 loss at Rice on Wednesday. (Tommy Mann Jr./Special to The News)

BEAUMONT — Lamar’s men’s basketball team wasn’t surprised by how well Rice has played of late. The Cardinals were just disappointed they didn’t overcome a slow start to become Rice’s first victims of the season.

The Cardinals (2-2) missed out on their first winning streak after falling to the Owls 92-84 in Houston on Wednesday. But it was no fluke for the previously winless Owls; they hosted California-Riverside on Friday and won 87-81 to improve to 2-4.

Now UC Riverside (3-2) of the Big West Conference and Lamar of the Southland find themselves in the same boat; they both want to bounce back from losing to Rice.

“It seems like we went into the game as if we wanted to outscore that team instead of making defense a priority,” Price said.

Today’s game, which tips off at 2 p.m. at the Montagne Center, closes the BD Global-sponsored Roundball Showcase, a four-game series for each team that also included Delaware State, Fresno State and San Francisco, among others. Lamar lost to Fresno State and beat Delaware State the previous week, both on the road.

It also begins Lamar’s three-game home stand, which includes a Wednesday battle with Texas-Rio Grande Valley (formerly Texas-Pan American) and Dec. 5 meeting with Idaho State. If Lamar can sweep the stand, it will have 300 victories all-time inside 31-year-old Montagne Center (297-144 all-time record).

“We’ve got some things to focus on,” Price said. “Playing at home does not guarantee you a win. With a young team, they’ve got to understand every game we play in, we’ve got to fight. They don’t get anything easy. But we do understand Riverside is a fine basketball team. And they’re coming to do the same thing we’re trying to do, get a victory. We’re going to have to fight, scratch and claw, as well as peck ‘em, to get a win.”

“Peck ‘Em” is a rallying cry for Cardinals sports teams.

Lamar’s 83.5 points per game ranks 48th out of 351 NCAA Division I teams, but the Cardinals want to show improvement on the defensive side of the ball from Wednesday, when Rice shot 51.8 percent from the floor. The Cards overcame a 44-30 first-half deficit enough to lead by one point twice in the second half but could not finish off the Owls of Conference USA.

The defensive effort may have been an aberration for the Cards, who have held opponents to 36.8 percent shooting from the field.

“We just learned we have to be ready to go from the jump,” sophomore point man Kevin Booze said. “We can’t wait until we start getting in a hole to start playing.”

But the offense hardly seems to be a problem for Lamar, whose three leading scorers (Kevin Booze, 14.3 points per game; Lincoln Davis, 14.0; and Nick Garth, 13.0) all play in the backcourt. Port Arthur freshman forward Dorian Chatman, who has started all four games, is a distant fourth in scoring at 6.3, tied with senior Dontavious Sears.

Booze had 25 points against Rice. Davis, the reigning College Sports Madness Southland Player of the Week, has been in double figures three times this season, with a season high of 18 against Delaware State, but he’s shot 52.9 percent (9 of 17) the past two games as well.

“It was a little bit of a confidence-builder” to earn the CSM award, Pittsburgh, Pennsylvania native Davis said, “but I just want to continue to come out and play my game.”