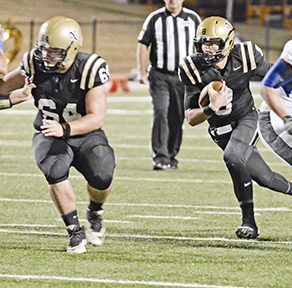 Past successes don’t count in Dogs-Horns

• Seating: Nederland fans on visitors’ side

• Next for winner: Bryan-Magnolia West winner in regional semifinals

George Ranch has fallen short of the state semifinals each of the past two seasons, but the Longhorns are still one of the more consistent football programs in Texas Class 5A.

“We’ve been fortunate to go 13-1, 12-2 the past two years,” coach Ricky Tullos said. “All these kids who are seniors have been a part of that. Some of them have been here three years. I think that confidence has built. A lot of continuity and consistency.”

It’s hard to overlook what the Longhorns have done in recent memory, including their 11-0 record this season.

“Speed, speed, speed, both sides of the ball,” Nederland coach Larry Neumann said. “They remind me a lot of Crosby in the skill sets that they have. Defensively, they’re physical. They’re big. They run well. They’re a bona fide state contender, no doubt about that.”

Much of that speed comes from the Longhorns’ standout rusher Darius Anderson, who’s committed to Missouri. Anderson has 1,125 yards and 18 touchdowns rushing, gaining 7.4 yards per carry, according to statistics compiled by the Houston Chronicle.

Their second-leading rusher, Alex Fontenot, is just 88 yards away from 1,000.

“We want to run the football and play great defense, no matter what level you’re at,” Tullos said.

The Longhorns are heavier with the run, which is a change from New Caney, Nederland’s bi-district round opponent in the 5A Division I playoffs. And Anderson is another top-tier running back Nederland’s multi-faceted defense will have to slow down to have a chance to win.

“I think they’re much more run-oriented,” Neumann said. “They don’t throw the ball like New Caney, but they do.”

For its part, George Ranch has a big task on its hands — slowing down a Nederland team that rallied off 504 total yards and held New Caney to 215. Nederland gave up only 88 yards rushing.

Neumann expects tonight’s area round game, in which the Bulldogs are looking for their first win in the stage since 2012, to be “the same song and dance”: Nederland’s  defense will be charged with getting off the field more than George Ranch and giving its high-powered offense, which stars its own all-state running back candidate in Austin Krautz, a chance to score more points.

Neumann acknowledges this will be “a heck of a challenge,” but added that records don’t matter.

• Nederland coach Larry Neumann: “It’ll be a huge test for our players. We’ve been blessed with good health. I think our players are excited about the opportunity.  They’ve seen them. They know what they’re up against. We’re going to have to play a higher-level performance if we expect to win.”

• George Ranch coach Ricky Tullos, on facing a Nederland defense that shows multiple formations: “Week in and week out, we see something different. We never know what we’re going to get. I don’t see it being any different Friday night.”

By I.C. Murrell The News sports editor Take away one bad first quarter, and the start of the Kenneth Coleman... read more