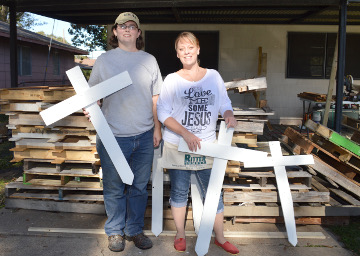 NEDERLAND — A group of people from across Mid-County and beyond are banding together to support a 45-year-old monument at Port Neches Riverfront Park one cross at a time.

Last week city leaders in Port Neches received correspondence from the Freedom From Religion Foundation asking for the removal of the 10-foot white cross that has stood at the park since 1970 citing the constitutional principal of separation of state and church after receiving a complaint from a Port Neches citizen. 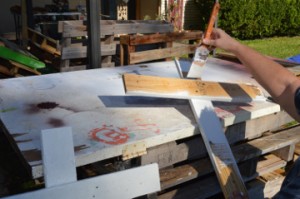 “I heard about the cross issue in Port Neches and it kinda bothered me,” Boneaux said during a break in constructing crosses at her home on Wednesday. “This started from a simple post on my Facebook page about placing crosses in our yards in support.”

A friend then told her of how a church in another state went through something similar and created crosses to be placed on their lawn and offering the crosses for those who wanted one.

“I thought, we can do the same thing,” she said. “Get the message across and support the cross at Port Neches. I figured it would be a couple of people, friends and family.”

The idea spread like wildfire and soon they were blasted with requests. 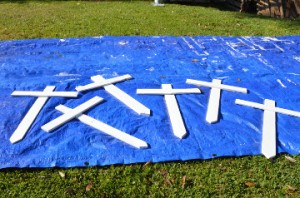 About 200 crosses have been made so far and the group wants to hand-out the crosses to the first ones who made their request. To do this they will meet for prayer at 7 a.m. Sunday at Port Neches Riverfront Park.

“Anybody can come but we want to reach the first few hundred who requested a cross,” she said adding all of the crosses will be blessed.

The group is thankful and donations they’ve received. Ritter Lumber donated some 1 X 4 boards and cut them to size as well as donating screws and paint. Summer’s Abbey Flooring Center provided an unlimited amount of pallets to construct the crosses and has offered their site for future pick-up of crosses.

Little White Cross is a non-profit organization. Donations may be made to Neches FCU, account 65410, in care of Little White Cross. All donations will go strictly for materials to keep the mission ongoing.

Donations are not necessary to receive a free cross.

Creating the crosses and with a multitude of orders on standby is an uplifting experience for the group’s members.

Gabriel said the task makes her heart feel good in that she’s spreading the word. Boneaux agreed, adding she has wondered what her purpose in life is and even prayed on the issue, then along came this.

The women’s reaction to the news that the FFRF wanted to take away the cross made them realize they had work to do.

“The reaction for all of us is that we need to take a stand,” Gabriel said.

Since the group’s inception they have heard form people near and far; Nevada, California, Washington, North Dakota and Kansas.

Little White Cross doesn’t want to stop when the Port Neches issue is over. They are also toying with ideas of creating T-shirts where 100 percent of the proceeds will go to local charities and even hit the streets with the message.

Port Arthur’s City Council and the city’s Economic Development Corporation board both agreed during a joint meeting Tuesday the... read more