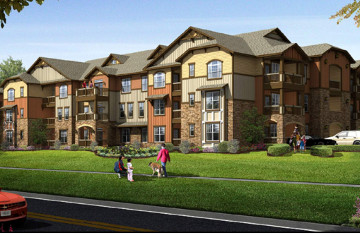 A conceptual rendering of a set of apartments to be located at 3031 Eighth St., in Port Neches. The issue was approved by the Zoning Board of Adjustment on Nov. 9. On Monday, councilmembers authorized the city attorney to file a document for review of the decision.

PORT NECHES — Councilmembers in Port Neches are looking to the court regarding the city’s zoning board of adjustment’s decision to allow construction of a new apartment complex.

Jeff Ahktar of Amron Housing Group owns the Palms Apartments in Port Neches as well as other apartment complexes in other cities and has constructed a number of new homes in the city.

Ahktar was granted several variances for the project for the property located at 3031 Eighth Street.

Port Neches City Council held a special meeting that included an executive session on Monday in which they authorized the city attorney to file a writ of certiorari for jurisdictional review.

Lance Bradley, attorney for the city, could not comment on the issue.

Ahktar, family members and members of Soutex Surveyors also attended the meeting. Soutex Engineer Anthony Leger said the apartments are a mix of two and three story apartments with 145 units with an investment of $8 million.

The Eighth Street roadway is two lanes with Nederland’s Avenue H on the opposite side of the road.

Ahktar and the engineering group were uncertain of why the special meeting was held, they said.

The Zoning Board of Adjustment of the City of Port Neches met on Nov. 9 and approved a variances to go above the two-story height requirement, to place more than 12 attached dwellings units under one roof and go beyond the acreage density.

The ‘writ of certiorari,’ which is similar to an appeal, is asking for a court to review the decision of the zoning board.