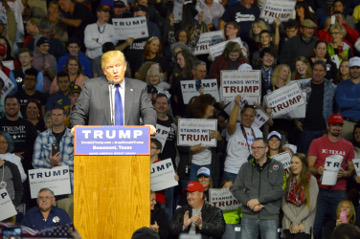 BEAUMONT — Presidential candidate hopeful Donald Trump was met by thousands of eager fans — and some protestors, during his stop at Ford Park in Beaumont on Saturday.

Trump entered the arena to Twisted Sister’s “We’re Not Going To Take It” amid cheers then asked for a moment of silence for the victims of the ISIS attack in Paris.

Paris, he said, has some of the toughest gun laws in the world but no one was armed by the “bad guys” who led the shootout. He believes there would have been a different outcome had the law on guns there been different. 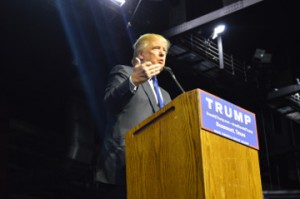 Trump then touched on the issue of illegal immigrants.

“We’re going to build a big wall. It’s gotta look beautiful because some day they’ll call it Trump Wall,” Trump said, adding one day the illegals who left will come back to America the legal way.

Families of people whose loved ones were violently killed by illegal immigrants were brought to the podium where one by one they told of the crime that forever changed their lives. Through tears they showed photos of the deceased. 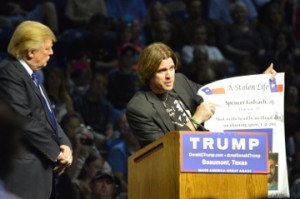 A man speaks of the loss of a loved one who was killed by an illegal immigrant.
Mary Meaux/The News

Trump took a verbal jab at President Barack Obama who, the day before, said ISIS has been contained.

The issue of illegal immigrants was a hot topic and Trump garnered cheers again when he spoke about the wall. Mexico, he said, would pay for the wall. The “bad ones” — meaning the illegal immigrants in violent street gangs and those associated with drugs, will be the first ones to go and the rest will follow.

Education was another topic on Trump’s agenda. America is way behind other nations in education and something must be done about it.

His final statement “end Obamacare” was with thunderous applause.

Tammie Johnson of Port Arthur was impressed with Trump’s speech.

“I love the fact he wants to build a wall and send them back and we’re going to make America the strong force it once was,” Johnson said referring to Trump’s statement about strengthening the military.

Michael Hargrave of Port Arthur likes the fact Trump is not a politician but a man who knows how to make money.

“He’s not trying to agree with one side or the other,” Hargrave said. “I think it’s time for this (change) to happen.”

A Houston area woman who did not wish to use her name said Trump was fantastic.

“I’m a teacher and I like what he said about education,” the woman said. “I have a lot of kids, probably illegal immigrants, and have to make a lot of accommodations for them. It’s a tremendous amount of work for teachers. Time and money and legal students have to sacrifice their education for this.”

Now that’s a playoff: Broncos gamble pays off for Indians

BAYTOWN — For the first time since 2010, Port Neches-Groves coach Brandon Faircloth was able to dance and wave his... read more