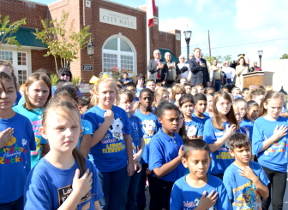 NEDERLAND — The city’s brand new veterans park was officially dedicated Wednesday while a crowd gathered to pay tribute to U.S. military men and women who have served their country.

“Welcome all you ladies and gentlemen, especially all our veterans. This is your day and we salute you for all you have done,” Nederland Mayor Dick Nugent, said during the Veterans Day ceremony.

Nederland Veterans Park has been two years in the making, and the vision of a city that wanted to do more to honor U.S. veterans, Nugent said.

“We came up with the money and idea; they are the ones that put it together,”

Nugent said, noting that the sun was shining.

“They said it was going to rain and pour down all day today but even God is honoring the veterans. Look at the sky,” Nugent said

He urged Americans to do more than be filled with pride on Veterans Day while recognizing World War II veterans known as members of the Greatest Generation.

“They left World War II and built the greatest country in the history of the world,” Weber said.

If king for a day, Weber, who was admittedly straying from political correctness, said he put prayer back in school.

“If we got back to teaching the kids what makes America great, we could honor our vets like we should,” he said.

Weber’s wife, he said, taught fourth grade students for 27 years, and has said children today do not respect authority.

“Our veterans knew in order for our country to be great, you have to be just and right,” Weber said. “We need to teach kids what the veterans know, that freedom is not free. I apologize to our veterans today. We have not done a good job of honoring your sacrifice.”

The Veterans Park, he said, is not yet complete. Plans are to add a soldier silhouette sooner than later.

“Last week $17,576 was donated by an anonymous Nederland businessman. Now we are going to be able to do it sooner,” Austin said.

The city’s library is in the process of creating a database to be used in an electronic kiosk at the Veterans Park. The database will allow people visiting the park to look up a relative, alive or deceased, and find out about their military service.

Already, 400 names have been collected.

Austin urged anyone, whether from Nederland or elsewhere, to contact the Marion and Ed Hughes Library at 409-722-1255, to add a name to the database.

Trump campaign stop in Beaumont; how to get tickets, times, date