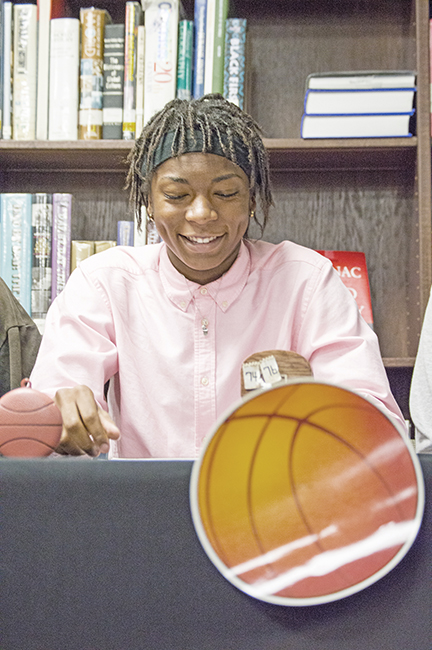 Port Arthur Memorial senior Jakeira Ford promised herself she would not cry Wednesday.
It was a promise she broke to herself after signing with the University of Texas-El Paso to play college basketball.
Ford committed to UTEP earlier this school year and her promise to the school never wavered.
“To be honest, the letters stopped coming once I committed,” Ford said. “I was not worried because I was committed all the way to UTEP.”
Ford was not a stranger to UTEP and its history among the college athletics world.
Her favorite movie is “Glory Road”, the 2006 tale of Texas Western coach Don Haskins who led the first black starting line up to the NCAA national championship in 1966. Texas Western became UTEP in 1967.
Ford was named to the all-district team in 2015 after posting 17.8 points and 10.7 rebounds a game as a junior. She goes to UTEP which finished 12-16 last year and 7-11 in Conference USA action.
She drew offers from Louisiana State University, the University of Houston, Texas A&M, Louisiana Tech, Stephen F. Austin University, Florida International, Witchita State and Kansas State to name a few. She had also been recruited by the University of Southern California and Lamar University. “UTEP was a great opportunity,” Ford said. “I am very happy with my decision. The coaches there are great. They recruited me two years ago. I was nervous when I first went up there and then I felt I would be very comfortable.”
Ford said she plans to major in psychology.