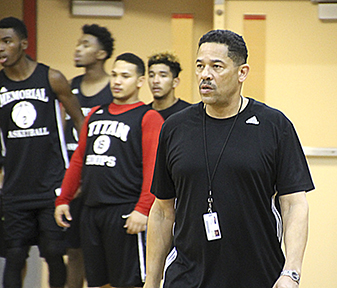 Like many first-year coaches, Port Arthur Memorial’s Kenneth Coleman begins with the end in mind.

Coleman, a Lincoln alumnus and former assistant under Terrell Henderson and the recently departed Travis Williams at Memorial, returns to Port Arthur after spending three seasons at North Shore, where he helped the Mustangs win the 5A state championship in 2014. (North Shore now competes in Memorial’s district, 21-6A.)

His system emphasizes fast-pace offense and in-your-face defense, both of which he likens to Shaka Smart’s style of play at Texas. That’s where one of Coleman’s former North Shore players, Kerwin Roach, is a freshman.

Coleman said it’s quite the change from Williams’ half-court sets, so it took a while for his players to adjust.

But they’re liking it.

“I’d rather play like that,” senior guard Nelson Mitchell said. “But it was good adjustment. I think we’re going to play a lot better, looking like that. Coach gives us a lot of freedom to play basketball and have fun with it.”

Coleman cites a mix of senior leadership along with talented younger players that could be key for the Titans to begin a journey back to basketball prominence. Sophomore Rio Keller could see plenty of time along with Mitchell in the background, while classmate Darian Chatman tries to pick up where his brother, current Lamar freshman Dorian Chatman, left off as a high schooler. Dorian averaged 18 points, 5 blocks and 12 rebounds a game last season under Williams and at one point was ranked the 16th best player in the state, according to his LU bio.

“I want to do the same thing he did, just even more,” Darian Chatman said of his brother. “He was a good leader. He put us in the right place. He let us do what we needed to do.”

Senior Tyryn Hinton has recently been cleared for basketball activities after missing much of the football season with a concussion.

“I’m ready to get back on the court,” Hinton said. “Ready to bring the football toughness to the basketball team. Ready to get down and dirty.”

The Titans will have to right from tipoff, when Ozen vists. Coleman, who was hired as head coach in August, only wishes he had an offseason to spend with his new team.

“But the kids are working hard,” he said. “They’re sponges. They’re trying to give me everything I want. Unfortunately, we’ve got a difficult schedule. We’re going up against programs that are established like Ozen, Central, Nederland. You’re talking about some of the best programs in Texas.