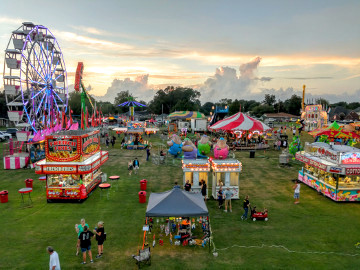 Pecan Fest a success despite obstacles

GROVES — Despite some uncontrollable roadblocks organizers with Groves Pecan Festival are deeming this year’s event a success.

“Friday was fair. Saturday was just basically a wash out; we opened around 5 p.m. but didn’t do very much,” Gene Venable, president of the Groves Pecan Festival Committee, said. “Sunday was a complete success. Everybody was happy. Everybody was riding rides, eating foods and buying crafts.”

The annual event, which formerly occurred in September, was moved to November to be out of peak hurricane season and take advantage of cooler fall temperatures.

But record-breaking rain fell across portions of the south two weekends in a row that led to the newly hired Lowery’s Carnival Company being literally stuck in the mud in New Orleans, Louisiana. The carnival’s arrival was behind schedule and when they did arrive the equipment had to undergo inspection by fire department officials, which is a norm.

In addition to the delay in the carnival there was also a record high temperature of 88 on Friday followed by the record 3.08 inches of rainfall on Saturday.

Ronnie Boneau, executive director of the Groves Chamber of Commerce and Tourist Center, said several events were cancelled including the much anticipated parade that was to feature present and past pageant queens as well as the pie eating contest. Several musical acts were also forced to cancel their performance due to the weather.

“But we did have the Cooking with Pecans contest and vendors and the carnival opened up,” Boneau said of Saturday after the main rain was over. “It was rain boots and slickers.”

Boneau said committee members are looking at the possibility of bumping the festival dates back to the last week of October.

Those dates, he said, will not be in conflict with the opening of hunting season or Trade Days in Winnie.

“But we can’t go much farther back in October,” he added. “The third weekend of October is UIL (University Interscholastic League) marching contest.”

Boneau said they do not plan on moving the dates back to September.

Location was also a topic of discussion and is something Boneau hears every year especially if there is rain.

“We hear it every year. Put the festival at the old Kmart parking lot or downtown and get it off the grass,” he said. “First there has to be electrical connections. I know Nederland does that (festival in their downtown) but a lot of work and money goes into it. An electrical grid has to be set-up. Parking needs to be considered and businesses downtown may not want to be shut down.”

Boneau said he and the committee members have considered many different options over the years but the Lion’s Park location is working out.

“Other than some standing water it wasn’t bad. It wasn’t as muddy as last year,” he said. “The ground held up considering the volume of water we got. And the weather, this was abnormal. Historically we have a drier and cooler November.”

Kathy Pollock has a special place in her heart for veterans. Pollock, member services director at the YMCA of Southeast... read more