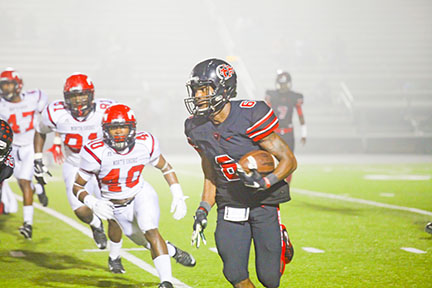 There will be no playoffs for the Port Arthur Memorial Titans in 2015.
The North Shore Mustangs made sure of that with a 38-7 victory Friday night at Memorial Stadium to end the Titans’ season.
Memorial finished the year 3-7 overall and 2-4 in District 21-6A play. The Memorial loss sends the Beaumont West Brook Bruins into the postseason. The Bruins face Pearland at 7 p.m. Friday in Pearland.
North Shore (7-3, 6-0) knocked out Memorial with 17 points in the first quarter. The Mustangs churned out 468 yards of offense against the Titans, 314 rushing and 154 passing.
“There is a reason those guys are the district champions,” Memorial coach Kenny Harrison said. “They are a very good football team.”
It was not just on offense the Mustangs proved their toughness against the Titans. North Shore limited Memorial to 184 yards of offense, 90 rushing and 94 passing.
The only score for the Titans came late in the game when quarterback Keitha Jones found De’Andre Angelle for a 32-yard touchdown with 3:30 left. By then, North Shore had already put up its 38 points.
Bryant Badie and Maciah Long were all over the field for the Mustangs. Badie rushed for 100 yards on eight carries, threw for 18 yards and caught four passes for 62 yards with a touchdown.
Long rushed for 83 yards on six carries, threw for 136 yards on 11-of-15 passing with one interception and three touchdowns and even caught four passes for 34 yards.
Once it was over, it was easy to see the hurt in the Titans players’ faces, especially seniors like Kameron Martin and Marcus Younger, who are seniors and played their final game for the Titans.
“Our kids fought and worked extremely hard,” Harrison said. “Our goal and focus here in Port Arthur is to win a state championship. That is what we are always going to strive for. Unfortunately, we didn’t get in the playoffs.
“These kids played with a lot of pride. I am proud of the 2016 class. We are going to work extremely hard to make sure these young men to have somewhere to go, whether it is an academic scholarship, athletic scholarship or whatever else it can be.”
Badie got the Mustangs on the board first with a 31-yard touchdown run before
Long found Carl Guillory for the first of two touchdowns in the game between the duo.
Guillory and Long hooked up again in the second to give the Mustangs a 24-0 lead.
Badie caught Long’s final touchdown of the night in the third quarter as North Shore took a 31-0 lead into the fourth.
“That is a big 6A team and a good 6A team,” Harrison said. “They were undefeated in district for a reason.”