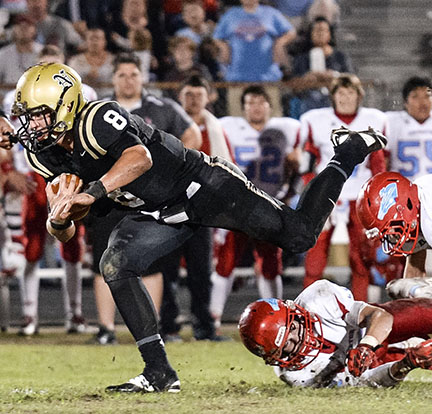 Mitchell LeBaron of Nederland breaks the tackle of two Lumberton defenders on Friday at Bulldogs Stadium. (Brian Vincent/Special to The News)

NEDERLAND — When Austin Krautz left the game to a standing ovation in the fourth quarter, that’s when it hit him. He was walking off Jerry Mallory Field at Bulldogs Stadium for the final time as a high schooler.
The emotion left his voice still cracking a little moments after Nederland defeated Lumberton 51-21.
“It’s just a special feeling,” he said. “It’s the best feeling in the world. I love my coaches so much and all my teammates. The way we played this year is just amazing.”
For the third straight time, Krautz is a district champion. For the fifth straight time, Nederland is a district champion.
Even if the Bulldogs (7-3, 6-1 in 22-5A) have to share the title a second straight year.
Port Neches-Groves thumped Vidor 50-7 to stake its first claim since 2009.
“I remember the first day before we went into two-a-days, we talked about what people thought we were going to do,” Nederland coach Larry Neumann said. “The worst thing you can do is tell a Nederland Bulldog they can’t be a champion. These guys did it themselves. Senior class did it all the way from last January. This was important for us tonight. This title means something to these kids.”
Krautz left the Bulldog faithful with one final act of greatness at home: 21 carries for 191 yards and three touchdowns. His two longest runs, 40 and 39 yards, both went for scores in the second half.
Krautz, quarterback Mitchell LeBaron and the rest of the Nederland seniors have Connor Perkins to thank as well. The junior wide receiver caught for touchdowns on his first two receptions (78 and 32 yards), and finished the night with one more catch for 8 yards.
“Me and Connor have been working real hard a lot in practice,” LeBaron said. “It’s good to finally come put it out in a game.”
Perkins’ big night was just a small part of a big game for LeBaron, who completed 9 of 18 for 222 yards, all of his completions coming in the first half. Krautz got in on
LeBaron’s act with a 42-yard catch and run that set up his 5-yard TD carry late in the first half.
“We had to come in here trying to play our butts off, and you have to make big plays because sometimes the main player won’t make the big plays, so you have to step up,” Perkins said. “You have to be on your game because if Krautz isn’t on his game, little brother has to step up and make plays as well.”
The big win allowed the Bulldogs to put in the backburner any memories of last
Friday’s 18-14 upset defeat at Goose Creek Memorial. The week before, Nederland thwarted Baytown Lee 63-10 at Bulldogs Stadium.
“It’s never easy losing a district game, so we had to fight through it,” LeBaron said.
“Everyone in the locker room has one goal, and we knew we can fight through it and get this win.”
Friday’s game wasn’t very much in doubt when the Bulldogs built on a 23-7 halftime lead, scoring three more TDs in the first 6 minutes after the break. That’s when
Krautz broke his two longest runs.
Lumberton (7-3, 4-3) had a bright spot in senior Timothy Rhodes, who rushed for 102 of his 155 yards on eight second-half carries. Rhodes changed to No. 3 from No. 7 during the latter part of the game when his jersey got torn.
Next for the Bulldogs is a date with New Caney next Saturday in the 5A Division I bi-district round at the Thomas Center in Beaumont. Kickoff is set for 6 p.m.
“I think we’ve got to be better everywhere, to be honest with you,” Neumann said.
“We have to be at our best to have a chance.”
Lumberton will take on Crosby in the 5A Division II bi-districts at 7:30 next Friday night in New Caney.