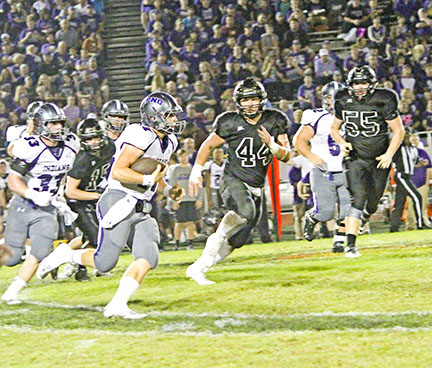 By Tommy Mann Jr.
The News Correspondent
VIDOR — The Port Neches-Groves Indians surged past the Vidor Pirates on Friday night and enter the Bi-District round of the playoffs as co-district champions.
The Indians cemented their status as co-champions of District 22-5A on Friday with a 50-7 victory over the Vidor Pirates at Pirate Stadium thanks to a nearly unstoppable offense and a punishing defensive effort.
“Our goal tonight was to win the game and to stay healthy in the process, and we were able to do both of those,” said Indians Coach Brandon Faircloth. “We were able to score enough points and get some guys out of the game early to avoid injuries.”
The Indians powerful offense looked as if it was heading for a three-and-out on its first series, but on fourth and two, PN-G called for a fake punt as Jace Runnels scooted through the line for five yards and a first down. It was no looking back for the Indians from that point.
Quarterback Adam Morse marched the offense down the field in just over five minutes before connecting with receiver Caisen Sullivan on an 8 yard pass and an early 7-0 lead over Vidor.
Vidor (3-7, 2-5) went three-and-out on its first series and was forced to punt. This time Morse used his feet instead of his arm to make the Pirates pay as he bolted 59 yards for another PN-G score.
The only miscue of the night for the Indians occurred in the second quarter as PN-G looked to be prepared for another score. Morse unleashed a pass toward the right corner of the end zone, but Vidor defender Peyton Berg picked it off for a touchback.
The Indians defense stepped up as Vidor began moving the ball for the first time as Pirates running back Blake Rowe was stripped of the ball near his 40-yard line.
Indians defensive back Cole Girouard scooped up the ball and darted toward the end zone before being tackled at the goal line. On the next play, Kody Cropper crashed in for the touchdown and a 21-0 lead near the half.
The PN-G defense held Vidor on its next series and forced another punt. Morse picked the Pirates defense apart with a steady dose of passes to his receivers, including four consecutive first downs before making a 5 yard toss to Sullivan for a 28-0 lead at the half.
Morse and company picked up right where it left off after the defense continued its aggressive play and recovered another Vidor fumble on its first possession of the second-half. The Indians only needed four plays to march 17 yards as Morse bulled over two Vidor defenders down the left sideline for a 7-yard scoring run. The two-point pass conversion gave the Indians a 36-0 lead.
The Indians defense held the Pirates high-powered offense in check all night, as the
Pirates only managed 158 total yards.
Vidor sustained its best drive of the night on the following possession and marched
70 yards for its only score of the night, as Trevor Duff zipped around the right end for a 28-yard run.
“Vidor is a good team, and Coach Mathews is a great coach,” Faircloth said. “Our defense played well and did a great job. Vidor has the number one offense in the district, and to be able to hold them to seven points speaks a lot to the preparation and effort of our players and coaches this week.”
Morse closed out the night with an 11 yard toss to Jack Giblin, who made a spectacular dive into the end zone for another Indians touchdown early in the fourth quarter.
Another Vidor turnover, its third fumble of the night, on the next drive gave PN-G a short field to work with. By this point, Faircloth had pulled the majority of his starters. However, the Indians continued to execute plays and it was quarterback Roschon Johnson scooting in from the 1-yard line for the final touchdown of the game.
PN-G (8-2, 6-1) will take on the Dayton Broncos (7-3, 6-2) in the Bi-District round of the playoffs at 7 p.m., Friday, at Stallworth Stadium in Baytown.
“We’re happy to get the win, but we’ll get back to work on Monday,” Faircloth added.
“Dayton is a good team, and we are looking forward to a great week of practice as we get ready for the playoffs.”