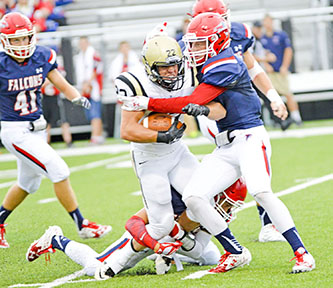 Anyone looking for just one reason why Nederland didn’t seal its fifth straight district football championship last Friday won’t have an answer.

“I don’t think you can point to one thing and say, that was the reason we didn’t win the game,” coach Larry Neumann said. “We had chances to win behind everything. We didn’t make enough plays to win. I wish I could say, ‘We were flat’ or “We didn’t play hard’ or something like that. We didn’t connect on both sides of the ball like we have. It was unusual for us, but sometimes things like that happen.”

But, thanks to Goose Creek Memorial’s 18-17 upset win over Nederland in Baytown, the District 22-5A championship race is still wide open for the 11th and final week of the regular season.

Despite the questions surrounding Nederland’s upset a week ago, Neumann said the Bulldogs are squarely focused on Lumberton.

Knowing what’s now at stake, it goes without saying the Raiders have had a little more pep in their steps at practice.

“With the kids, we really didn’t know how they would go into it,” first-year Lumberton head coach Chris Babin said. “The message we sent to them was they still have a shot at a piece of the district title. They make their own decision what their mentality is going to be like. They’re up, happy and enthusisastic. But they’re also intense and focused.”

And Nederland is focused on slowing down senior running back Timothy Rhodes, whose 17 rushing touchdowns (one game is missing in district statistics) are second only to Beaumont Ozen’s Calvin Tyler (20) in 22-5A. Then again, keying in on running backs in this district is commonplace.

“At this point in the season, you’ve seen everybody a bunch of times,” Neumann said. “I saw them in their first district game against [Beaumont] Central, and Central beat them right near the last play of the game. I was really impressed with Lumberton on both sides of the ball and the energy they brought to the game.”

Lumberton has the third-best total defense in 22-5A, but it’s one that kept the top offense in Vidor from posting a bunch of points last Friday in a 28-13 Lumberton win. The Raiders’ offense is middle of the pack, averaging just shy of Nederland’s 372.9.

But Babin is aware the Raiders have a tall order on their hands visiting a perennial power.

“We definitely have to play well to beat Nederland,” Babin said. “Even in the few years they haven’t been in contention [for a district title], they’ve been tough to boeat. In the eight years I coached here, we only beat them twice.”