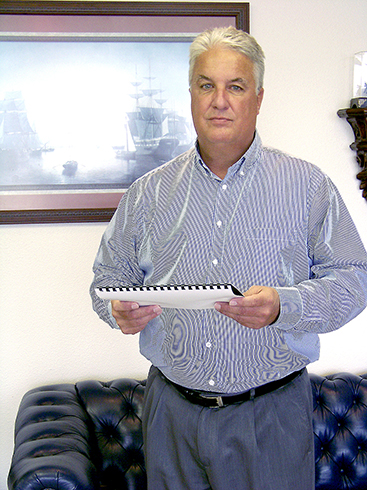 Special to the News

As the new director of trade development for the Port of Port Arthur, Anthony Theriot feels like he has come full circle.

Born in Port Arthur in 1959, the son of Beatrice and Charles Edward Theriot was reared in Port Neches and graduate from Port Neches-Groves High School in 1977. He earned a degree in mass communications from Lamar University and started in the steamship business, clearing ships through customs and taking care of the ships’ crews’ other needs.

This gave him the experience and opportunity to actually ride on those ships as they came into port.

Transportation logistics has been his career specialty for 30 years, most recently in the trucking industry with YRC Freight.

Then he got the opportunity to join the Port of Port Arthur, mentored by  Orlando Ciramella, senior director of trade development. “I thought it was a good fit for me,” Theriot said. “One thing I like is the people – the employees and the commissioners. They’re tops in the industry.”

“I couldn’t ask for a better person to shadow than Orlando,” he said. “He’s so knowledgeable.” He smiled and said, “We know we will get our hands dirty when we have to. We believe in good customer service. These are capable people I work with. I wouldn’t change it for the world.”

Married to Brenda Theriot since 1985, Theriot has a son and a daughter, twins Logan and Laci. Logan is a Lamar University graduate, while Laci graduated from Lamar State College-Port Arthur, and University of Texas.

“I feel very lucky to be able to work with an organization like Port of Port Arthur,” he said. He sees his task as one that aims at bringing new business to Port Arthur and new jobs for Port Arthur people with the help of others on the port staff. “These people care. They have a sense of customer service.”