Neumann pleased with Jones’ switch from QB to LB 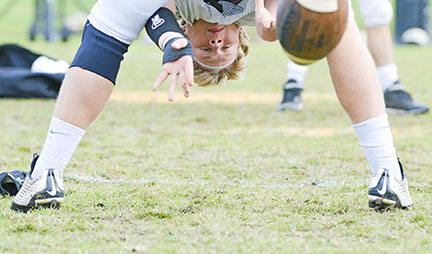 NEDERLAND — Football is in Nederland senior Jacob Jones’ blood.
It has been since the day he was born. His grandfather, McNeil Moore, played in the defensive secondary for three seasons with the Chicago Bears in 1954 and from 1956-57.
Moore was a part of the Bears team that played in the NFL Championship Game in 1956 against the New York Giants. The Giants won, 47-7, at Yankees Stadium. In a very interesting sidebar, the Giants had two assistants with names Vince Lombardi and Tom Landry.
So, naturally Jones gravitated to the pigskin at an early age and, up until early last year as a junior, he was a quarterback.
Coach Larry Neumann called Jones a very good quarterback who had the skills to be under center and that Jones also had a defensive mentality.
Jones was moved to linebacker last year. That is a position he holds now for the Bulldogs along with being the team’s deep snapper on punts and field goals.
“It started in the middle of the preseason last year,” Jones said about the move to linebacker. “I have enjoyed every minute of it so far. I never thought I would be on defense. I have always been a quarterback growing up, but I really like it. I think previously being on the offensive side of the ball helps me on defense.”
One of the main reasons Neumann orchestrated the switch was the physicality Jones shows on the football. Jones and the Bulldogs defense has improved over the last month, around the time Nederland started its District 22-5A schedule.
“It was out of necessity,” Neumann said. “His characteristics that he exhibited to me and the staff during the offseason is he is smart and he is tough. When he was a quarterback, he was a tough guy. He had some quarterback skill, but he was the type of guy who could take a hit and wouldn’t mind doing what he had to do physically to get the job done. So, when we had that necessity at linebacker, you thought of him because he could pick it up in a hurry and he was a tough guy. He has assumed a great leadership role on our defense. He is the quarterback of our defense.”
Jones and the Bulldogs are 6-2 overall and 5-0 in the district standings heading into this Friday’s game at Goose Creek Memorial. It was the Patriots who last year ended the Bulldogs’ 29-game district-winning streak.
“We have not forgot about last year,” Jones said in reference to the Patriots’ 57-56 double-overtime win over the Bulldogs in 2014. “We know they have not forgot either. They are motivated to try and knock us off again. We are just as motivated to win an undefeated district championship. That is our goal.
“We love having a chip on our shoulder. We like when people pick us third, fourth or fifth and out of the playoffs. It makes it that much better when we prove them wrong. District championships are what are expected here at Nederland. We are trying to do it again like we have in recent years.”
The Bulldogs have won at least a share of the last four district titles, three outright championships from 2011-13.