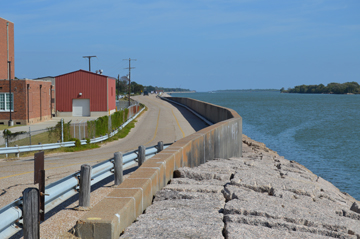 In the wake of Hurricane Patricia’s pounding of the Southwestern Mexico coast Friday, and this year’s 10 year anniversary of Hurricanes Katrina and Rita, Port Arthur can be cautiously optimistic knowing that its levee system has been accredited by the U.S. Federal Emergency Management Agency.

FEMA notified Jefferson County Drainage District No. 7 that the Port Arthur and Vicinity Hurricane Flood Protection Levee meets the requirements to be shown on the new Flood Insurance Rate Maps as providing protection from the base flood.

As such, Port Arthur’s 36-mile levee system, which includes the seawall and about 20 pump stations, is the first coastal levee system to be certified along the Texas coast by FEMA.

For Port Arthur area residents, that means there is only a 1 percent chance of a hurricane tide exceeding the height of the hurricane flood protection levee in any given year.

For that reason, flood insurance premiums will not significantly increase for a number of years, Stuart Salter, with Julian Salter Insurance Agency, said.

“It’s a real big deal. Not so much because it is going to save us money, but because it will keep our rates from going so high,” Salter said. “It will allow us to continue to have preferred rates in the city of Port Arthur, not in Pleasure Island or Sabine, but it does the main part of Port Arthur a lot of good.”

Phil Kelly, Drainage District 7 manager, said the district expended about $2.5 million mainly in engineering fees to get the levee certified.

Initially DD7 went to the U.S. Army Corps of Engineers to request assistance in the certification process, but was turned down because the Corps did not have the resources to assist, Kelly said.

Without the assistance of the Corps of Engineers, DD7 hired three engineering firms to do extensive design work needed by FEMA to show the levee would protect the city in the event of a major storm.

“Basically, the engineers had to design a levee that is already in place,” Kelly said.

If the levee had not been accredited, it would have been designated special flood hazard area in FEMA’s revised flood plain maps.

The certification process started going on 10 years ago when FEMA sent letters to the mayors of each city in Port Arthur’s levee system. Because DD7 is responsible for the levee’s maintenance and upkeep, Kelly said the cities allowed DD7 to work directly with FEMA.

DD7 paid for the entire project out is its own funds, Kelly said.

The certification will be effective until FEMA remaps its flood plain system.

A race car, a drone and Big Arthur have all had Julian Salter Insurance coverage. The agency has been in... read more