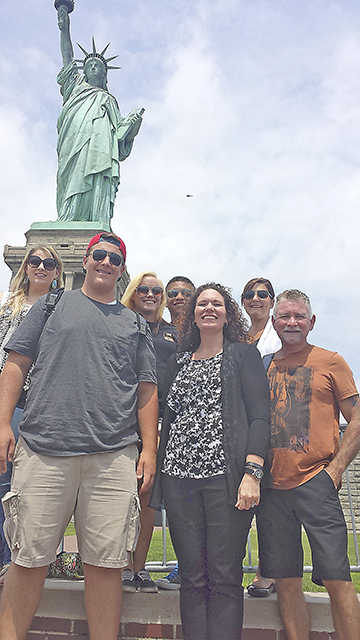 Visiting the Statue of Liberty was one of the highlights of a trip a group from Nederland High School took to Boston and New York City.

NEDERLAND — Four students, seniors Brian Speight, Pam Hutchins and Darian Owen and junior Eve Owens, along with teacher Kerri Hays felt a sense of joy as the landing gear of the plane touched down on the runway in Boston. As they stepped out of the chaotic terminal, they could not wait to explore all the wonders that Boston and New York would have to offer.

While in Boston, the group visited Lexington and Concord, walked a part of the Freedom Trail and saw Paul Revere’s house.

“Lexington and Concord left me feeling very patriotic. It was a great experience because we got to see one of the major battle grounds of the Revolutionary War,” Hutchins said.

They also managed to squeeze in a game at Fenway Park.

“Fenway Park was so cool. I think we all ended up spending more money on Red Sox stuff to wear to the game than we did to get in the park. Seeing the green monster in person was crazy exciting,” Hays said.

After exploring Boston for a day and half, they took a three hour bus ride to New York.

“On the way to New York two girls got carsick on the bus ride, and that was definitely my least favorite part,” Owen said.

After the very eventful road trip into the city, the group explored the Metropolitan Museum before going to the top of the Empire State Building.

“I loved the Empire State Building. While we were waiting in a line, a guard randomly started yelling at Brian for having a Boston cap on; it was hilarious. Brain was so stunned that he didn’t know what to say, so he kept looking at me to feed him the answers to questions like ‘Where are you from?’ Then the guard started laughing and said he was from Boston. The look of relief on Brian’s face was priceless,” Hays said.

The next day the group traveled to Ellis Island and to Liberty Island to see the Statue of Liberty.

“Being able to see the Statue of Liberty was a dream come true for me. That was my favorite part of New York,” Speight said.

After returning to the city, the group visited the 9/11 Museum.

“When I visited the 9/11 Museum, I had a lump in my throat nearly the entire time. The quotes were so depressing that I had to keep myself from crying,” Owens said.

The museum had a strong effect on the whole group.

“I was extremely sad at the 9/11 museum and a little angry at the same time. I was also happy because someone built the museum as a reminder to the people who were not there,” Speight said.

Hutchins said that her favorite part of New York was also the 9/11 Museum.

“The 9/11 memorial was such an eye-opening experience. There were so many film clips, recorded phone calls and reports shown to us,” Hutchins said. “I was there when it happened; I was only four when the Twin Towers crashed. I didn’t fully understand the impact until I actually saw the memorial.”

After all the emotions of the day, the group ended on a happy note. They went to watch “Matilda” on Broadway.

“The play was so much fun. I was a little apprehensive at first, but it ended up being one of my favorite Broadway shows I have seen. I think just watching how all my students reacted to the play made it most memorable, but the acting and special effects were fun too,” Hays said.

To round out the trip, the group visited Time Square to see the sights and sounds.

“The weirdest thing that I saw in Time Square was all the interesting people who were dressed up in costumes and holding signs,” Hutchins said.

Owen said he was so excited when they went to Time Square because he was finally able to eat a New York style hotdog.

“At night Time Square is a whole different place because of all the lighted screens and the people,” Owen said.

After being gone for five days, the group landed safely back in Houston. They were tired and happy to see their families, but were also excited to tell them of their experiences.

Tori Battenfield is a junior at Nederland High School.