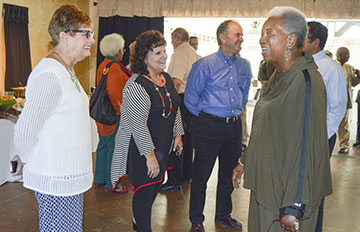 Plant managers and community leaders celebrated a decade and a half of working together to make Port Arthur a better place Monday night.

The occasion was a reception at Beau Reve to recognize the 15th anniversary of the Port Arthur Industry and Community Leaders Advisory Group. Besides saluting the past, the event focused on the city’s future.

“We have been at this for 15 years. Our first meeting was in the year 2000, and the world has changed very favorably since then,” John Hall, facilitator for the group, said.

Hall, who stood in for PAIG Chairman Greg Gentry, asked those in attendance to share their experiences with PAIG.

James Gamble, an outstanding basketball coach who took the Lincoln High School Bumblebees to four state championships, thanked the advisory group for what had been accomplished through the years while reminding them there was more work to be done.

Dan Duncan, one of the founding members representing industry, said the advisory group’s mission was to ensure that community and industry can work together to make Port Arthur a better place to live by awarding college scholarships and reducing plant emissions.

“About 100 college scholarships have been given out by the group for the city of Port Arthur,” Duncan said.

Hall said PAIG members during the 2015 would focus on key projects including continued improvements to the environment.

Hall said Port Arthur today is in attainment in every clean air requirement.

“We have forged a wonderful partnership with PAISD, particularly with Dr. Porterie’s leadership. We are doing things together that exceed what is going on around the state.

“We will redouble our efforts to educate and train Port Arthur residents for jobs. Our biggest challenge in the community is the relatively high rate of unemployment.”

The group’s 29 community members consist of educators, business leaders, and politicians, city leaders, among others.