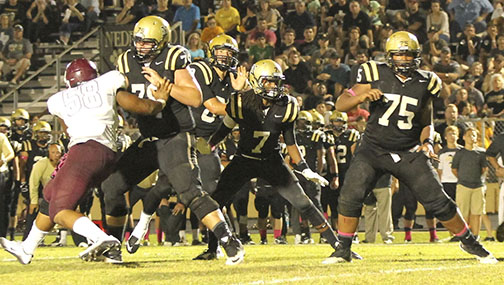 Corbin Smith (79) and Jakoeby Sonnier (75) have provided big blocks for Nederland’s offense. Smith’s academic and athletic skills has earned him looks from the likes of Stanford, Northwestern and Brigham Young. (Morgan Jones/Special to The News)

NEDERLAND — District 22-5A’s leading rusher, second-leading passer and fourth-leading receiver play on the same team that leads the district standings. Thank the offensive line in large part for that.
“We work really hard on the unity and the cohesiveness of the line,” Nederland offensive line coach Jae Stoker said. “I think that’s something different than any other unit. These guys spend a lot of time together. We work hard not only during practice, but we work on a lot of drills and different things during defensive practice.”
Nederland (5-2, 4-0 in 22-5A) is the only undefeated team in district play mainly because of the improving play of Stoker’s line, which includes major-college recruit Corbin Smith. The 6-foot-5, 305-pound senior right tackle is being recruited by Stanford, Northwestern, Purdue and Brigham Young.
“He has a nasty attitude about him,” head coach Larry Neumann said. “He gets a fit on blocks, and he finishes them the right way. He’ll grind you. He likes to move a guy from point A to point B against his will.”
Sounds intimidating enough.
Smith starts along with 6-foot-6 Justin Carr, a Lamar recruit, at left tackle, Austin Gauthier at left guard, Burke Badon at center and Jakoeby Sonnier at right guard. They’ve helped Nederland gain 389.6 yards per game as an offense, good for fourth out of the eight 22-5A teams.
But they’ve opened up big holes for Austin Krautz, whose 1,131 rushing yards lead the conference, according to district statistics. Krautz unofficially had 130 yards on 28 carries Friday in a 30-27 win against Port Neches-Groves.
In that game, the O-line gave quarterback Mitchell LeBaron the protection needed to hook up with Dean Fisher for a 25-yard completion that set up James Brindza’s winning field goal with 2 seconds left.
LeBaron’s 1,259 yards on 94-of-163 passing (57.6 percent) is second only to PN-G’s Adam Morse (1,727) in 22-5A. Fisher has 410 receiving yards and six TDs.
Naturally, the two numbers on The Reservation scoreboard — 30-27 — are most satisfying to Smith.
“It was more than satisfying,” he said. “It was awesome. No words can describe how big that was.”
The buzzword on Nederland’s offensive line has been chemistry, but there’s no mistaking how impactful the unit’s size has been. Carr added 20 pounds from the spring and now weighs 230 to go along with his tall frame. Gauthier at 265 and Sonnier at 270 provide interior protection along with 200pound Badon.
Neumann said Sonnier, a junior, could be the biggest surprise of the whole line.
“He’s always had a skill set, but you can tell he’s more confident in what he can do because he’s more aggressive in his blocks,” he said.
As for the chemistry, it was perfectly evident during Monday’s warm-up drills for practice.
“Look at us over there, holding up the guns and everything,” Carr said, referring to the hand signals similar to those at Texas Tech. “I mean, we hang out all the time. I think that’s what makes our offensive line the way we are.”