Coach: Demons faithful got to Cardinals 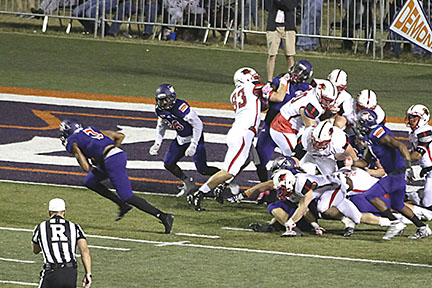 Adam Jones of Northwestern State recovers a Lamar fumble and returns it 95 yards for a touchdown Saturday. (Courtesy photo)

BEAUMONT — One thing about Saturday’s 48-35 loss at Northwestern State frustrated Lamar football coach Ray Woodard more than the slow start and not being able to close the gap.

And maybe that Northwestern State was winless going into the game.

“After all that … there were more obscenities and more problems with fans right here than I’ve ever been involved with,” the sixth-year Cardinals head coach said Monday, pointing toward sports information director James Dixon just a few feet away as an example of how close Woodard was on the sideline to the fans inside Turpin Stadium.

“When you’re not playing well, and you got somebody right there who’s all cussing you and talking about your family and things, that’s very tough on a 19 or 20-year-old,” Woodard added. “We overall handled it pretty good, but we had some guys who had some things to say. I’m not so sure if ol’ Ray Woodard at that age wouldn’t have some things to say, too.

“I’m not making excuses for our players, but at the same time I understood, or I had a little sympathy for our players for what they were going through, but we’ve got to do a better job with that.”

That’s how tough the crowd of 9,133 was in Natchitoches, La. It was, as Woodard put it, quite the hostile crowd.

“It affected our play some,” Woodard lamented. “That’s what it’s all about. That’s why they do it.”

Though few penalties against the Cardinals (3-3, 2-2 Southland) were for unsportsmanlike conduct, they drew nine in total for 80 yards, raising their conference-leading total to 63 flags for 531 yards (88.5 yards per game).

Still, the Cardinals had chances to chase away the Demons.

Woodard was confident that if Lamar had scored from inside the 10 before Reggie Begelton fumbled a handoff that was returned 95 yards for a Demons’ touchdown, the Cardinals would have completed the comeback from 17 points down. A Lamar score then would have cut the Demons’ lead to 34-28 with an extra point early in the fourth quarter; instead, it was 41-21.

And the Cards kept getting the treatment from the Northwestern faithful.

But Woodard addressed more than the back-and-forth jawing and chippy sentiments the two teams shared. He expressed frustration with his defense, which gave up 479 total yards to the Demons, although the Cards countered with 495.

“I’m frustrated because we’re not performing as well as I think we’re capable of,” Woodard said. “I think we’re more talented than we’re showing, and I’m more frustrated that we’re allowing the points and yardage that we are. I thought 35 points should have been enough to win, but I don’t think we did enough of a job defensively to win.”

He added he’s looking at making adjustments in personnel and schemes to correct the flaws for this Saturday’s home game against Central Arkansas.

As for the health of his quarterbacks, Woodard said Joe Minden, who started the past two games, is “healthier” after missing some time in September with a hand injury, and added that Carson Earp, who’s missed the past two games, “did some light stuff” during Sunday’s walk-through. Earp’s availability for the Central Arkansas game is unknown.

“I’m optimistic, but I don’t know any more than y’all do,” Woodard said of Earp. “He did not good enough late in the week to play this week and we’ll start seeing [today in practice].”