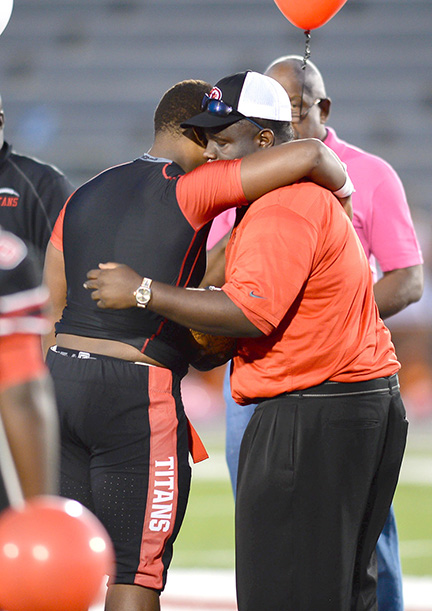 By Tom Halliburton
The News correspondent
Compared to the death of an assistant coach, Port Arthur Memorial only lost a football game Friday night.
But this 31-24 loss to La Porte marked the end of several other hopes for Kenny Harrison’s home team at Memorial Stadium. It assured the Titans of a losing season at 2-6 and totally messed up any realistic playoff dreams at 1-3 in District 21-6A.
None of the first two paragraphs address the agonizing plot by which the home team lost, less than a week after offensive line coach John Clayton Jr. died following a painful battle with kidney failure.
Memorial came within a yard of tying the game with 5 minutes to play and easily could have won this game without three turnovers and a handful of questionable play calls.
The night’s frustration hit the ceiling with 4:56 to go when quarterback De’Andre Angelle and running back Marcus Younger did not complete the handoff at La Porte’s 2-yard line. Kameron Martin had dashed 90 yards on the previous snap, as La Porte clung to its 31-24 edge.
The Titans’ third and final turnover came on first and goal at LP’s 1. Angelle faked a handoff to Younger, pulled the ball out and it landed on the ground in the hands of Dogs defender Sean Castillo.
“Angelle made a perfect read,” Harrison said, reflecting on the play. “He put it in Younger’s belly and pulled it out. The ball may have hit off Younger’s leg.”
This night contained plenty of irony. Martin carried 20 times for 195 yards, but La Porte often bottled him too. Memorial’s defense played perhaps its best game of the year, but powerful runner Nathan Redd still bulldozed his way for 113 yards and three touchdowns.
“I think it was by far the best game our defense has played,” Harrison said. “I thought our team played extremely hard.”
Harrison would not take or accept the blame for any play selections becoming a factor in this loss.
One undeniable fact is the game turned in the half’s final 3 minutes after Harrison opted to go for a first down on fourth-and-1 at the Titans 28. Memorial led 14-7 with 5:31 left in the half as Kadon Harrison tried to connect with Adrian Williams on a short stop route.
La Porte’s corner Vincent Chachere broke up Kadon’s pass, ran home a game-tying touchdown in seven plays and eventually took a 17-14 halftime lead.
“I don’t regret that call,” the Titans head coach said. “We took a chance there.”
Angelle replaced the younger Harrison at quarterback after his second of two interceptions with 2 minutes left in the third quarter. Redd had busted through tackles to place the Dogs up 24-17.
Falling back into a zone, LP’s outside backer Terrel Bernard picked off Harrison’s pass at the Titans 40 and scooted 27 yards to the 13. Redd took the scoring honors again for a 31-17 lead with 1:25 left in the third quarter.
By that point Dogs head man Jeff LaReau and La Porte’s staff realized they had much more success going north and south on the speedy Titans defense than when they tried to run the fly sweep and other wide plays.
John Clayton Jr. would have been very pleased with how the Titans responded to their 31-17 deficit. They covered 75 yards in 14 snaps for their night’s most sustained drive. Angelle lobbed a 38-yard looper to Kary Vincent, moving the offense into the red zone. Younger cut his 11-yard scoring run to the outside and took it to the pylon with 9:56 left in the game.
Jacorien Barnes, Cedric Lee, Odis Mack, Brandon Artis, Vincent and the defensive crew put up the stop signs just enough for the offense to regain possession. The opportunities finally ran out after Memorial’s third and final turnover.
The Titans have an open date before they visit Beaumont West Brook on Oct. 30.