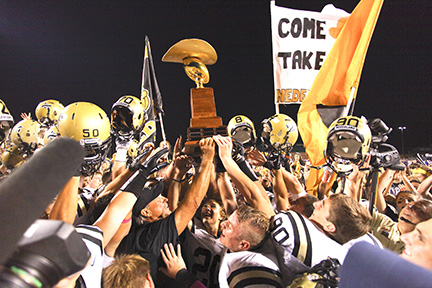 PORT NECHES — Write James Brindza’s name in the lore that is Mid-County Madness.
Brindza’s 24-yard field goal with 2 seconds left booted the Nederland Bulldogs to their sixth straight win in the Bum Phillips Bowl against the Port Neches-Groves Indians, 30-27.
Oh, the drama that comes when these two teams take the field against each other. It has been played 92 times and it seems every game has some type of thrill.
“I actually last night, I honestly had a dream I got to kick the game-winning field goal,” Brindza said. “I knew I could do it so I had to do what I had to do. They wanted me to miss it [by calling two timeouts before the attempt] and my team needed me to make it. I just had to do it. This was the best kicking performance of my career. It is such a surreal feeling right now. It is so great.”
After that, Brindza went speechless and for good reason. Good thing Bulldogs offensive lineman Justin Carr was ready to describe his feelings after the win.
“It feels great,” Carr said. “We were the underdogs in this. I love the fact we were underdogs. We came in here and got the job done. Every day we practice a play for the last play. Every day we practice the 2-minute drill. We went down the field and scored.”
PN-G (5-2, 3-1 in District 22-5A) tied the game at 27-27 with 2:01 remaining after trailing by as many as 18 points in the third quarter.
The Bulldogs (5-2, 4-0) took over at their own 35-yard line and went to work the best way Nederland knows how to in a tight game.
First came a personal foul against PN-G, and then star running back Austin Krautz picked up 14 yards on a 3-yard run and an 11-yard pass from quarterback Mitchell LeBaron. Three plays later, team-leading receiver Dean Fisher hauled in his seventh catch of the night to bring the Bulldogs down to the PN-G 8, a catch good for 25 yards.
Three players later and after two attempts to ice the kicker by the PN-G coaching staff, Brindza walked up and put another chapter of this storied rivalry in the books.
“I am going to tell you, we had them 24-6 and I was telling myself it was going to come down to the last play,” Nederland coach Larry Neumann said. “Something was going to happen. They were not going to go away. They didn’t. Give coach [Brandon] Faircloth and his staff credit. They don’t quit. I read the story how they come back and they do. Anyone associated with this great rivalry, they get their money’s worth every time. We managed to come out with a few more points than they did.”
Nederland scored 24 unanswered points after the Indians started the scoring off a 42-yard touchdown pass from Adam Morse to Jack Giblin with 8:59 left in the first quarter. A failed two-point try gave the Indians the early 6-0 lead.
Fisher and LeBaron then went to work and hooked up for a 7-yard touchdown and Brindza booted his first of three field goals to give the Bulldogs a 10-6 advantage with 2:48 left in the first.
Fisher would score again, this time from 15 yards out, before LeBaron ran in from a yard away as Nederland started to pull away, 24-6.
Giblin’s and Morse’s second touchdown connection, this one from 16 yards out, stopped the bleeding for PN-G with 11:55 left in the contest. Brindza’s night then hit another high note with a 43-yard field goal to put the Bulldogs up 27-14 with 8:52 remaining.
This came before two quick scores by PN-G, a 4-yard run by Jace Runnels and an 18-yard touchdown catch by Caisen Sullivan. Gunnar Nicholson’s PAT tied the game for the last time.
A game that looked to be a defensive struggle through one half turned into quite the night for some of the game’s biggest names.
Morse threw for 241 yards on 15-of-23 passing with three touchdowns and two interceptions. His go-to receiver was Giblin, who led the Indians with 133 yards on six receptions. Sullivan added 53 yards on six catches while Dylan McGough hauled in a catch for 20 yards. McGough had an 87-yard touchdown called back in the first quarter due to a PN-G penalty with Nederland up 10-7.
Krautz continued his stellar senior year with 130 tough yards on 28 carries while Fisher hauled in seven catches for 113 yards and LeBaron threw for 180 yards on 12-of-18 passing with two touchdowns and two interceptions.
“It is such a great feeling,” Krautz said. “It is unexplainable. You have to expect it to come down to the last play. I could barely watch when James was kicking. I had my head down and was praying. It was a great job tonight by our offensive line. Great job all the way around.”
The first half was nothing to be too proud of as both teams had two turnovers.
Morse had two first-half interceptions, one to Tavian Mayfield and the other to Jalen Cunningham.
Mayfield was pleased with the Nederland defense on a night that saw his team force two turnovers.
“It was amazing,” Mayfield said. “That (PN-G) is a heckuva team. When you have two great teams like this going at each other, it is going to come down to the last play. You will never win in blowouts. We knew that, so we prepared for it all week.”
LeBaron also threw two first-half interceptions, one to Nathan Vidrine and the other to Cole Girouard.
Girouard’s came in the end zone, off a tip from teammate Bryce Meche. Girouard was almost on his back when he grabbed the ball in the air for the PN-G touchback.
The Indians also had four fumbles but did not lose one.