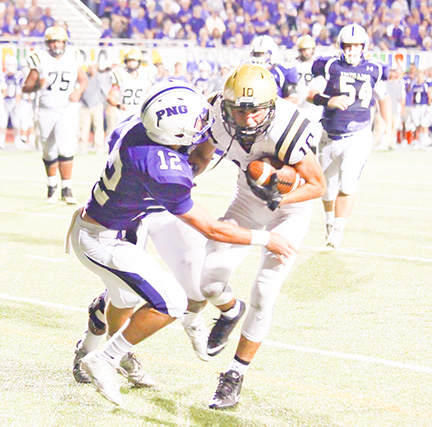 PORT NECHES — To say that Dean Fisher has blossomed in his first year on the Nederland varsity might be an understatement.
The junior has been a difference-maker all season long, and his role did not change in the Bulldogs’ biggest game of the regular season.
“The coaches, they knew how to get me open,” Fisher said. “And Mitch [Mitchell LeBaron, Nederland’s quarterback] knows how to throw great balls.”
Fisher elevated his role to hero Friday night, making a difficult catch to put the Bulldogs (5-2, 4-0 in District 22-5A) in the red zone for James Brindza’s winning field goal with 2 seconds left in a 30-27 feat at Port Neches-Groves. Fisher stretched out on a slant route from the left-hand side for the catch and was brought down at the 8 with 13 seconds left.
“I knew how to make the play,” Fisher said. “I knew how to get open and run the flat. Mitch put a great ball in a great position, and I just had to make the play.”
It might have been academic that Fisher, who had seven catches for 113 yards, would be the go-to guy. Two of the haul-ins went for touchdowns, one from 7 yards out on Nederland’s first offensive series and the second on a 15-yard high-arcing pass from LeBaron at the 8:43 mark of the third.
Fisher had a great feeling he would make a big difference.
“Ever since my JV year, I always knew I was going to be a big guy,” Fisher said. “[Wide receivers coach Bryan] Spell told me if I got my head right, I could be great. It’s what I’m doing right now.”
But it was three key catches by Fisher that kept Nederland on course. Aside from the crucial last-drive play, he converted third-and-3 on the opening series with a 9-yard grab.
In the third quarter, he came up with a 13-yarder on fourth-and-5 to the PN-G 19. On that drive, LeBaron ran in from 2 yards out to cap an 11-play, 49-yard series that melted nearly 5 minutes off the clock and give Nederland a seemingly safe 24-6 lead.
Then PN-G stormed back.
“We had to keep our confidence,” Fisher said, in the middle of pandemonium after the Bulldogs received the Bum Phillips Bowl trophy. “I can’t really talk right now.”
Fisher credited much of his success to the growing maturity of LeBaron, a senior first-year varsity starter who completed 12 of 18 for 180 yards.
“He works really hard in practice, so give credit to him,” LeBaron said of Fisher. “This whole year, we’ve made a bond, and it’s good to go finally do it in the biggest game.”

By Tom Halliburton The News correspondent Compared to the death of an assistant coach, Port Arthur Memorial only lost a... read more