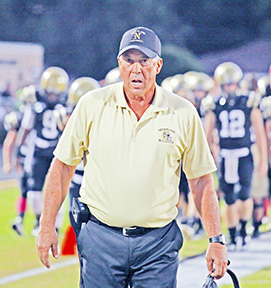 NEDERLAND — Larry Neumann never shies away from talking about the week of Mid-County Madness.

He knows all too well how important the contest between the Port Neches-Groves Indians and Nederland Bulldogs is to three cities.

That is why even before his Bulldogs took the field last Friday against Beaumont Central, he already had the Bum Phillips Bowl in the back of his mind.

“This game has been unique every time I have been a part of it,” Neumann said. “It starts the minute after you finish the prior game. Your focus starts to shift. You are still breathing hard from the last game and you know who is next.

“Actually, we knew who was next while preparing for our last opponent. We have never danced around that issue. We did know we still had to prepare well for Central and I think we did. Now, we are where we anticipated being at this point.”

Where the Bulldogs are is 3-0 in District 22-5A play, the exact record as the Indians. The winner tonight will be the district’s last remaining undefeated team.

Neumann’s first season at Nederland was in 1993. The previous four seasons saw the Indians win four straight games against the Bulldogs by a combined score of 145-13.

Since Neumann stepped on campus, the Bulldogs are 16-6 against the Indians, winners of the past five.

This year’s Bulldogs face an Indians offense that is balanced and full of playmakers.

Neumann understands his team has to keep an eye on a lot of PN-G players if Nederland expects to come out of this game 4-0 in the district standings.

“I am very impressed with PN-G and their entire football team,” Neumann said. “They get a lot of publicity for their passing game and for good reason with Morse and his contingent of receivers.”

Caisen Sullivan leads the Indians with 467 yards on 32 receptions and seven touchdowns. Jack Giblin has 345 yards on 25 catches and four touchdowns.

Neumann is also impressed with the PN-G rushing attack that averages 182.5 yards per game. PN-G’s leading rusher is Kody Cropper with 623 yards on 90 totes with five touchdowns.

“They feed off each other,” Neumann said. “It is going to be very difficult defensively to be successful consistently. Our defense has been up and down this year but we have played well enough to win at least in the district race. We will call on them again Friday and see how it goes.

“Looking at it, most people would say they generate their running offense from their passing game. If you have seen them play, you know they are capable of running the ball without having to throw it. They have a very capable offensive line and outstanding running backs in both Cropper and [Jace] Runnels. Both those guys are good players and Morse can run it himself. You have to try and slow down a little bit of all of it.”

Nederland’s defense counters giving up an average of 394.2 yards and 28 points per game.